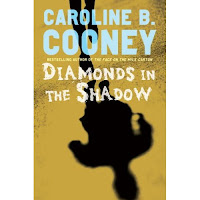 Just read an intriguing starred review about Diamonds In The Shadow (Delacorte, September 25, 2007), a new teen novel by
Caroline B. Cooney of Milk Carton fame in Publisher's Weekly. Here's an excerpt:

... High school student Jared Finch is cranky and skeptical when his mother decides to host their church-sponsored family of four African refugees in their well-appointed Connecticut home. Drawn in (just as readers will be) by the drama of the refugees' acclimatization to American suburbia, Jared soon warms to the Amabos, despite a growing suspicion that they aren't exactly who they say they are ...

Anybody else read it yet?