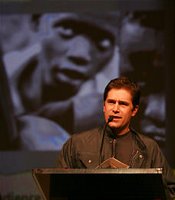 Got back from the annual Kindling Words Retreat last night with a horrible cold, but with four solid days of writing behind me. Checked in with the news to discover that two films about immigrants won the top four awards at the Sundance film festival. From an article in the Guardian:

Quinceañera, which examines Hispanic family culture through the eyes of teenagers living in Los Angeles, won the jury and audience prizes in the drama section, while God Grew Tired of Us took the equivalent awards in the documentary category at Utah's annual celebration of independent film-making. The latter, which took director Christopher Quinn four years to make, chronicles the lives of three Sudanese refugees after they emigrate to the US. Festival director Geoffrey Gilmore said: "This year we've seen a number of films that deal sensitively with the timely and complex issues of cultural assimilation and community. Clearly, these compelling stories along with the quality of film-making have resonated with audiences and jury members alike."