Here's a shout-out for "Little Miss Sunshine," a wonderful comedy full of characters I didn't want to leave. If you see the film, especially notice how Greg Kinnear uses movements and gestures to make us laugh as well as elicit our sympathy -- even though he's portraying such an annoying man. In one hospital waiting room scene, as his wife leans closer to the kids and calls a family meeting from which he's obviously excluded, watch how he joins their circle. His movement over to them, the distance he keeps between himself and his son, and where he chooses to stand all tell us reams about his character. Masterful acting. 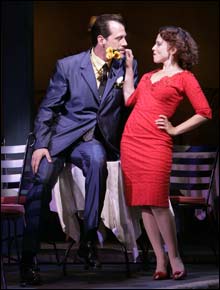 Then, last night we joined friends for a picnic dinner on the Boston Common to watch an under-the-starry-skies presentation of "Taming of the Shrew." (Side note: In Boston, in the Year of our Lord 2006, the Bard is still winning ovations and acclaim for this extremely sexist play. Sometimes I don't get western culture's uncritical adulation of Shakespeare as "high culture." He seems more Bollywood-esque to me, and director Gurinder Chadha should give up on Dallas and make a dancing, singing version of "A Midsummer's Night's Dream.")

Okay, back to the play. At first we were sitting in the back. The way back. The actors were small colorful blobs; we could hear the lines clearly but couldn't see anything. People up front were laughing hilariously, but we scratched our heads, looked at each other, and didn't get it. After the intermission, though, we moved forward, close enough to actually see the actors' faces, hands, and bodies. As we joined in on the chuckles and guffaws, it struck me again how crucial non-verbals are in acting to convey the nuances of character and to pull off good comedy.

SO ... my thoughts this morning turn to novels and non-verbals. I know we writers are supposed to use strong verbs and nouns to show how our characters are moving, standing, and responding, but we're shackled to words and words alone. The gift we're offered is the power of imagination, both our own and our readers. Here are my questions. How many of you writers actually envision a scene mentally before writing it? (I always do this as a reader.) How detailed are the characters' movements and expressions in your mind?

In my one-time on-stage fiasco, I realized how non-verbally challenged I am as an actor. I haven't been staging my scenes consciously as I write, but as I plug on with first draft of book no. 2 in the First Daughter series, I just may try that exercise ...