"Get away from that animal!" my mother called out. "He'll bite!"

Dogs wandered the streets in the city of my birth, Kolkata, India. They were wild, skinny, cowering, and sometimes rabid, and my thoroughly non-westernized parents taught us to fear them. When we moved to a country where some people seemed to revere dogs more than they did their aged relatives, I just didn't get the great American pet fixation. 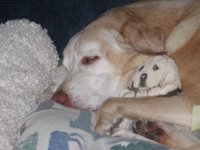 But then I became a Mom. Reluctantly, in response to the begging and wheedling of two four-year-olds, I agreed to acquire Strider. Over the years, I moved from keeping a distance to letting him follow me around the house with adoring eyes. And then I actually found myself becoming thankful for his presence. Immensely so, because when our boys got older and became more taciturn, still the conversations, stories, and jokes about Strider continued. They jettisoned stuffed animals and squirmed away from kisses, but affection for and nurture of their dog intensified every year. Basically, he kept their hearts soft and open, and I became a firm believer in the power of dog therapy.

That's why, with Strider's days sadly numbered, we brought Zipper home yesterday. As I write this with our new puppy's body nestled against my feet, I realize that my own tenderness towards him might be one of the biggest leaps I've ever made across cultures. Of course, I still have high expectations when it comes to the younger generation respecting and caring for ancient relatives -- which Strider thinks is a most excellent cultural practice.