Con permiso, the Fire Escape is delighted to excerpt the newest issue of Tiger Tales, a wonderful bimonthly newsletter from Papertigers.org, a project of Pacific Rim Voices:

The very foundation of today's Hispanic culture rests on the original immigrants and the twenty nations that have contributed to the rich tapestry we call Hispanic America today – each one of them a microcosm of cultures and traditions in itself. With the increased numbers of Hispanic Americans comes increased cultural influence, but also more widespread stereotypes. We hope the books we highlight here can help children and young adults understand more about their rich heritage and that of their peers.

Author/illustrator Amelia Lau Carling talks about growing up in Guatemala, in a Chinese household, and the books her childhood experiences inspired.

Author René Colato Laínez talks about coming to the United States as a teenager, from El Salvador, his challenges and accomplishments ever since, and his latest book, I am René, the Boy, winner of the International Latino Book Award for Best Bilingual Picture Book.

Illustrator Leyla Torres' beautifully crafted artwork stands out, whatever theme she is tackling, and is at its best when richly evoking family life, and her native Colombian culture.

Bilingual Storytime: 10 Best Books To Read to a Young Audience by Ana-Elba Pavon.

Wisdom and Heritage: Stories about Grandparents and their Grandchildren by Aline Pereira.

The results of the International Latino Book Awards, an annual set of awards for Spanish, English and Bilingual books written by Latinos.

Colorín Colorado, a web-based project that provides information and advice for educators and Spanish-speaking families of English language learners. 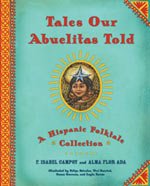 Guatemala ABCs / A Book About the People and Places of Guatemala by Marcie Aboff, illustrated by Zachary Trover (Picture Window Books, 2006, ages 4-8).

I am a Taxi by Deborah Ellis (Groundwood Books, 2006). This novel begins in a cell in San Sebastián Women’s Prison in Cochabamba, Bolivia, where twelve-year-old Diego has already lived with his mother for nearly four years, as well as with his three-year-old sister, Corina, who has never known any other form of existence. His father is held in the men’s prison across the square and Diego has a certain amount of freedom to move between the two. His parents were sentenced to seventeen years imprisonment for drug-smuggling when drugs were found taped under their seats on a bus.

Off We Go To Mexico: An Adventure in the Sun by Laurie Krebs, illustrated by Christopher Corr (Barefoot Books, 2006, ages 4-8).

I am René, the Boy / Soy René, el Niño by René Colato Laínez (Piñata Books, Arte Público Press, 2005, ages 4-8). What’s in a name? That’s what René sets out to discover when his identity is threatened on the day a new girl arrives in his class – and her name is René too. How can his name be a girl’s name?!? He is proud of his name: it is tied up with his roots in El Salvador, not only because his father and grandfather are both René too but also because that is where he first learned to write it. Things are not so bad though. It turns out that René the girl actually spells her name differently: Renee.

Truth and Salsa by Linda Lowery, by René Colato Laínez, illustrated by Fabiola Graullera Ramírez (Peachtree, 2006). Twelve-year-old, Michigan-born-and-bred Hayley is having difficulty coping with her parents' separation. When her Mom needs some time alone, Hayley has to go and spend six months with her "weird" Gran who's taken herself off to live in Mexico.

Papertigers also provides new book lists focusing on Latino people, history, and culture, as well as many other wonderful resources. You'd be muy loca not to go there right now.