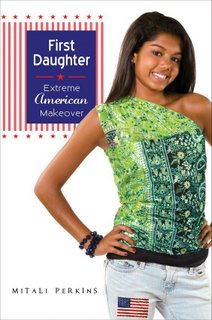 I just received the galleys of the first novel in my YA series about Sameera Righton, First Daughter: Extreme American Makeover (Dutton, June 2007). Isn't the cover girl GORGEOUS? She's Pakistani-American, like Sameera. I submitted the plot treatment for this book two years ago, before Senator McCain had become a forerunner on the Republican side, and knew nothing about Bridget, his daughter who was adopted from Mother Teresa's orphanage in Kolkata. (I know, I know, nobody's going to believe me ... sigh.)

As soon as I learned about Bridget, I wrote McCain's office to tell them about the book, worried that I might be perceived as trying to capitalize on the hardships they've already faced as a mixed-race family. His "people" (an intern, I think) wrote back with warm encouragement, and even asked for a copy of the galleys. Dutton just sent a couple to Arizona, and I hope 15-year-old Bridget gets to read one; I'd LOVE to hear what she thinks.

Of course, I'm not sure if it will help or hurt the series if McCain stays ahead in the game. What? Yes, of course I care more about the nation and planet than I do about my books, but this is the Fire Escape, people, the one place I get to whine about my writing in peace.