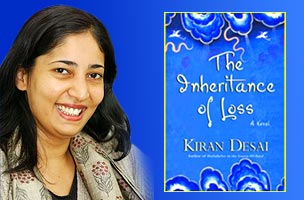 Kiran Desai has won the prestigious Booker Prize for her novel, The Inheritance of Loss. She's the daughter of Anita Desai, who was shortlisted thrice but never won. This novel is all about life between cultures, as Desai herself described in The Rediff Interview:

(My) second book isn't a book that is set entirely in India, but one that tries to capture what it means to live between East and West and what it means to be an immigrant. On a deeper level, it explores what happens when a Western element is introduced into a country that is not of the West, which is what happened, of course, during colonial times and is happening again with India's new relationship with the States. I also wanted to write about what happens when you take people from a poor country and place them in a wealthy one. How does the imbalance between these two worlds change a person's thinking and feeling? How do these changes manifest themselves in a personal sphere, a political sphere, over time?