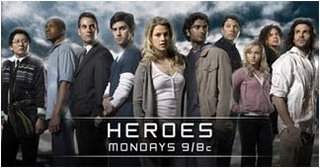 It's no wonder teens like mine are devouring NBC's hit show. I'm addicted, too, despite my low tolerance for violence on the screen. I watch because (a) well, it's good entertainment, and (b) Heroes highlights so much of what I celebrate about teenagers:

This generation's relaxed take on interracial relationships. There's the lovable Japanese guy and sweet Southern redhead, the Italian-American hospice nurse and his elegant biracial-ish lady, and the violent, gorgeous blonde mother, her African-American husband, and their mixed-race child. Best of all, you don't even notice the different hues of skin as you watch these characters struggle through their relationships.

This generation's realistic grasp of human nature. As noted by Matthew Gilbert of the Boston Globe, this cast of imperfect heroes have weaknesses that are the shadow side of their strengths:

One of the brilliant strokes in creator Tim Kring's "Heroes" concept is that some of the superpowers are extensions of character. Nathan Petrelli is a dodgy person, and so he can literally fly out of bad situations. Niki Sanders is at war with herself, and when she looks in the mirror she actually sees a demon glaring back. Claire is the dearest of them all, though, as an intrepid teenager who adapts and recovers despite the psychological and physical blows the world throws at her...

And in keeping with this power-made-perfect-in-weakness motif, the most recent episode revealed that the cop with the power to read minds has, of all things, dyslexia.

The passion of teens to be part of a grand, noble mission. These characters must unite to "save the cheerleader," but even more important, they are called to use their gifts to "save the world."

An understanding of the deep bonds formed through adoption. Clare's father will apparently do anything to protect his non-biological and extremely beloved daughter.

Despite everything that's happened during the lifetime, their persistent openness to foreigners. A gorgeous, intelligent Indian guy (finally, a South Asian hero for my brown boys) attempts to bring these heroes together and make peace with his dead father and sister (named "Shanti," or peace).

Consider tuning into this show, perusing the graphic novels, or catching the episodes you've missed on-line, especially if you're called to the grand mission of serving and loving teenagers.