Poetry Friday: In Search Of Our Mother's Gardens

In honor of black history month (and the release of my new book), I give you Alice Walker's poem that was a part of her 1974 essay, In Search of Our Mother's Gardens: The Creativity of Black Women in the South:

They were women then
My mama's generation
Husky of voice - Stout of Step
With fists as well as
Hands
How they battered down
Doors
And ironed
Starched white
Shirts
How they led
Armies
Headragged Generals
Across mined
Fields
Booby-trapped
Ditches
To discover books
Desks
A place for us
How they knew what we
Must know
Without knowing a page
Of it
Themselves. 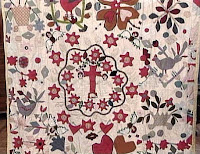 Notes from Sotheby's on the quilt to the left:

Although the maker of the second quilt is unknown, the story it tells reveals a family's grief at the loss of two young daughters. The rare appliqued and pieced cotton, flannel and velvet memorial quilt was done in the Baltimore Album tradition around 1900-1910, in which individual panels are arranged in a narrative sequence to tell a story. This quilt illustrates the events in the life of one African-American family with symbolism and colors from their African heritage. The story the quilt tells is the loss of two young sisters who perished in an epidemic that hit Baltimore at the turn of the century.

At the center of the quilt's detailed composition are the small forms of two young girls, wearing matching white gowns and pearl necklaces, lying next to each other on either side of a bold red cross. Flower garlands and winged angels surround the two girls, suggesting their final resting place ...

The woman who made the Baltimore quilt was a skilled seamstress who expressed her sorrow over the girls' death through the fine stitches in this exemplary quilt. She did this with her adept handling of needle and thread, and by including distinct African design motifs in her composition. The vibrancy and range of bright colors in the floral applique belies the sadness felt over the girls' deaths. Throughout the quilt are bright whites, suggesting the African world of the ancestors, and vivid reds, representing the Shango cult of the Yoruba people.