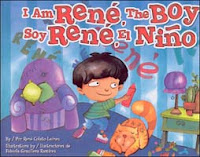 I just discovered La Bloga, a group blog that features posts on "Chicana Chicano Literature, Chicana Chicano Writers, Chicana Chicano Fiction, Children's Literature, News, Views, and Reviews." Children's literature is covered by René Colato Laínez, author of bilingual picture books like I Am René, the Boy / Soy René, El Niño (Piñata Books), which won the International Latino Book Award for Best Bilingual Picture Book of 2006 and a special recognition in the 2006 Paterson Prize for Books for Young People, and a forthcoming book from Boyd's Mill Press called My Shoes and I. Here's an excerpt from his bio:

Colato Laínez is a graduate of the Vermont College MFA program in Writing for Children & Young Adults. He was born in El Salvador and was inspired to be a writer by his great uncle, Jorge Buenaventura Lainez, at whose house he first learned the word "escritor/writer." He has been a bilingual elementary teacher at Fernangeles Elementary School, where he is known by the students as "the teacher full of stories."

Laínez is beginning a series on La Bloga called Living To Tell The Story: The Authentic Latino Immigrant Experience in Picture Books. Tune in; I plan to.

More: Read Critícas' interview with Laínez, and the Papertigers review of I am René, The Boy.