No Namesake For Us 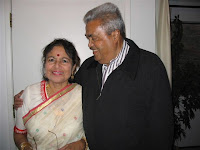 My sister and I visited our parents this past weekend in California. One of our goals was to convince them to experience Mira Nair's film cross-generationally — an experience highly recommended by several South Asian friends.

The challenge was that my parents never go to the movie theater. After we'd wheedled and begged for a while, they finally agreed to go this time because (a) our beloved city of Kolkata appears in The Namesake and (b) Bangla, our language, also co-stars, since Jhumpa Lahiri, the novel's author, is Bengali.

But this once-in-a-lifetime event was not to be. We'd just settled ourselves in our seats when an usher announced that the projector's bulb had suddenly burned out with no chance of a fix. I exchanged a look of disgust with my sister.

Ma and Baba could tell we were disappointed. "We'll go to the cinema the next time you come," Baba promised.

"But The Namesake won't be around then," my sister said.

"And you guys won't ever go to a movie theater again, I just know it," I added skeptically.

"When? When will we ever hear Bangla in an American feature movie again? Or see scenes from Bengal on the big screen?"

"When they make a film out of one of your books," Ma answered, her voice ringing with the delusional maternal conviction that demolishes rational argument. "Now let's go home and relax."

And that's exactly what we did.