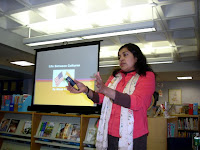 I love answering questions during author visits. What I've learned, though, is that most questions reveal more about the people asking them (i.e., the kids) than about the person going on and on up front (i.e., me).

After years of fielding questions during my presentations at schools and libraries, I'm finding myself getting pinged by a variety of odd thoughts. Sometimes it's worth listening to those internal noises before I answer. Here are three questions I was asked during a visit with fourth, fifth, and sixth graders last Wednesday, for example, and the corresponding muttering in the strange place called my brain:

Q. Do you feel more at home in the California house you grew up in or in your house here in Massachusetts?

Brain Ping: This kid looks a bit wistful. She might have two homes herself. Divorce? A recent move? Tread carefully.

A. Both feel like home. That's the amazing thing. You can feel at home in many places if you're willing to be flexible and enjoy the best things about all of them.


Q. If you could go back in your life and change something that happened, what would it be?

A. I've learned that the hardest things I've gone through have made me the person I am, so I wouldn't change them, no. Now that I've survived them, I find I'm most thankful for the challenges in my life. When I regret something I've done, I try to ask for forgiveness, but there's no use letting it haunt me forever, right?


Q. How do you stand living so far away from your parents?

Brain Ping: This girl's from Bangladesh. She gets the intensity of my South Asian filial ties, even though I'm middle-aged. I can give it to her straight.


I stick to the truth because the pings aren't always right, but I like listening because they remind me that it's never about me -- it's about the kids with the courage to raise a hand and ask a question from the heart.