I'm going on the road next week, so I'm not sure if I'll be able to sneak out to the Fire Escape too often, but I'll try, because I love it out here. Here's where I'll be:

Friday, April 11th - Saturday, April 12th: On Friday, I'm at the New England Society of Children's Book Writers and Illustrators Annual Conference, enjoying dinner and a cabaret presentation by author/illustrator Anne Sibley O'Brien, author/illustrator David Hyde Costello, and Charlesbridge editor Yolanda Leroy called CONFESSIONS OF THE PROFESSION: A STARRED REVUE. I can't wait to see it! I'll also be presenting a workshop on Saturday April 12th from 10:05 -11:00 a.m. called "Pajama Promotion: Five Web-Savvy Ways to Generate Buzz About Your Books."
Wednesday, April 16th: Come join us for my session called "Books Between Cultures," offered from 12-12:50 at the Texas Library Association Convention, (Program CPE#356 in room D 171/173 sponsored by the Texas Association of School Librarians) followed by book signings on the exhibit floor, first at the Penguin booth #1701 from 2 – 3, and then at the Author Autographing Area with Charlesbridge from 3-4. Stop by and say hi.

Friday, April 18th: If you're in the San Francisco Bay Area, you can catch me on ABC/KGO's View From The Bay from 3-4 p.m. PST (streaming online live here), where I'll be chatting about growing up between cultures and how stories kept me balanced.
What's that? You want to be on television, too? Well, then, your mother should cold-call the station without telling you about it beforehand and leave a message bragging about her kid. Yep, that's how I got the gig. Thanks, Ma. 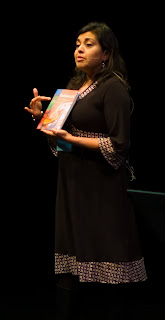 "If you don't promote this book,
my mother will cold-call you, too."