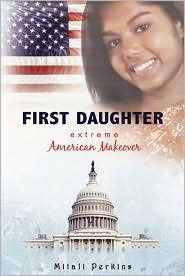 Today I'm celebrating the release of affordable paperback copies of FIRST DAUGHTER: EXTREME AMERICAN MAKEOVER from Puffin/Speak books. I hope they sell well, because the fate of sequel FIRST DAUGHTER: WHITE HOUSE RULES in paperback form depends on it.

In honor of the book's release, I sent Malia and Sasha Obama a signed copy of RICKSHAW GIRL just for the heck of it (they're a bit young for the FIRST DAUGHTER books, which I sent to Bridget McCain months ago).