Six Questions To Ask About A Story: #3

This summer I'm sharing a series of six questions which I encourage readers and educators to ask about a book. (BTW, I'll be offering my BOOKS BETWEEN CULTURES presentation at YALSA's YA Lit Symposium, where we'll be discussing these questions and more.)

Question Three: Do the illustrations or cover art make the characters seem either more or less foreign than depicted in the story?

Nowhere in Cynthia Kadohata's book WEEDFLOWER does Sumiko wear a kimono. Why did the publisher feel they had to make her look more Japanese than American, especially when a girl in jeans behind barbed wire would be more historically accurate and powerful?

And listen to Ursula LeGuin's perspective before considering the advance release copy of her novel POWERS (cover art below to the left), which the publisher eventually changed to reflect the protagonist's Himalayan ancestry:

The characters are white. Even when they aren’t white in the text, they are white on the cover. I know, you don't have to tell me about sales! I have fought many cover departments on this issue, and mostly lost. But please consider that "what sells" or "doesn't sell" can be a self-fulfilling prophecy. If black kids, Hispanics, Indians both Eastern and Western, don't buy fantasy -- which they mostly don’t -- could it be because they never see themselves on the cover? 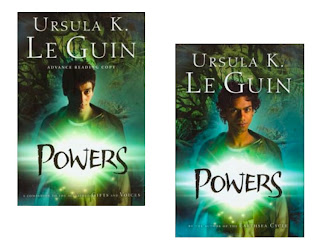