Should an author include descriptions of a character's race in a story?

Well, yes and no. It depends. How's that for a wishy-washy answer?

Here's my attempt to sum up a lively discussion that's taken place here, and here, and also here over the past couple of days. As I tuned into the communal wisdom, I gleaned ten tips for authors about describing race in novels. Please correct, disagree, and inform as we continue the conversation, because I say mea culpa on most of the errors I describe below.

Identity is actually more about ethnicity, a word that comes from the Greek "ethnos," literally meaning "gentiles" and related originally more to language than skin color or hair texture. There really isn't a generic "African" race, for example -- there are groups who speak Kikuyu, Zulu, Ashanti, Fulani, etc.

Every one of us has an ethnicity. What language(s) did your four grandparents speak? The sixteen great-grandparents? If you don't know, then you don't know. Whether that matters is up to you, but one rite of adolescence in North American culture is to identify one's own ethnicity.

The consensus is that in a third-person narrative voice it's best to avoid socially-constructed race words like African-American, Asian-American, etc. to describe only the characters who aren't of European descent. And North American authors conventionally don't use "European-American" or white because to label every character's race gets tedious. So don't use any such labels at all. Characters and first-person narrators, however, are free to use them any way they choose.

2. Give your story the power.

First, why are you describing the ethnicity of your characters? Don't do it if your honest answer is "I want to show how open-minded I am" or "I want to move the world towards a better day."

A better answer might be "because the particular community where the action is set is diverse." Or: "because my protagonist knows how to make kimchee from scratch." The story and characters, and not your best political intentions, should determine whether or not you provide ethnic cues in description.

Second, if you're writing for a generation of readers who regularly mix and explore race and ethnicity, why aren't you doing the same?

Bad, but honest answer: "I never really thought about it." If that's the case, take a long, hard look at your story. The descriptions of physical appearances probably indicate the ethnicity of your characters even if you weren't purposeful about it. Alternate your characters' primary ethnic self-identifications. How does that feel? How does that change your story?

Better answer: "My story's set in rural Minnesota, Mitali, and everybody's ancestors came from Norway. Sorry, but their cheeks do turn apple-red when they're embarrassed."

3. Respect your readers right to cast the story.

Heavy-handed authors force readers to receive stories and picture characters the way we want them to, dang it. Authors who understand and celebrate the dialectical dance with a reader often cut descriptions.

If my story doesn't require that my characters affiliate with a specific ethnicity (as with some fantasy or science fiction books, for example), could I err on the side of giving my readers' imaginations enough space to "see" the characters any way they choose?

It's their loss if they always picture an all-white cast, but defining an ethnic secondary character solely to "broaden kids' horizons" makes us guilty of patronizing them and tokenism. Not good.

As the storyteller, you decide if, how, when, and why to reign in your exceptional descriptive skills. Another helpful practice is to re-read your story with different readers in mind -- some living across borders and oceans, some dwelling on the margins of mainstream culture, and some in generations to come where race and ethnicity will be defined in completely different ways.

Will your descriptions of physical appearance confuse or exclude such readers? What's lost by leaving a few words out or replacing them with others? Do some wordplay with physical descriptions, and think about how the descriptions might empower or limit young readers.

4. Know your characters' relationship to ethnicity.

Define in your mind (a) the languages spoken by your characters' great-grandparents, and (b) how they each see and understand ethnicity. If a teen character jokes about race with his friends, let them go wild. Make his mother the ex-hippie squirm as she overhears their conversation.

5. Check your descriptions of non-verbals.

Go ahead, force your character to pale or blush, or to swish her long blond ponytail, but that means she's definitely of European descent. Hey, if that's what your story and character requires, so be it. But be aware of what you've done.

6. Do your homework if you cue ethnicity with jargon, diction, or accent.

Language can be a lazy shortcut to convey ethnicity. It can also be a powerful tool. The storyteller who crafts dialogue with jargon, diction, and accented English must be diligent in study as well as creative -- listening, learning, and communicating linguistic differences in the right way at the right time for the right reasons.

A trend in YA lit is to feature a realistic photo on the cover which communicates the physical appearance of your main character in one fell swoop. Likewise, in an illustrated picture or chapter book, the artist casts the characters.

The group of people with an interest in packaging the book -- editor, marketing folks, designer, bookseller, author -- should be having this conversation: By trying to sell more books with this particular cover, are we usurping more power than necessary from the imagination of the reader?

Is the rendition true to the author's description or does it add to or even contradict it, as in Cynthia Kadohata's Weedflower, where the sole instance of the protagonist dressed in kimono is on the cover and nowhere to be found in the story?

One of the advantages of a written story over a film is that readers are free to cast the characters in the imaginary YouTube video playing in their minds as they read your story. Or just to let the story roll forward without mental pictures of the characters, something I do often as a reader, especially with secondary characters. 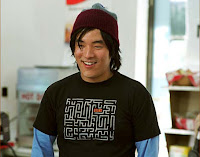 Did you picture Brian McBrian, Tibby's romantic interest in The Sisterhood of the Traveling Pants, as Leonardo Nam to the left?

How about imagining Laurent, the least lethal of the evil vampires in Twilight, as an African (played by Edi Gathegi)?

Hollywood made those decisions for you. Am I glad? Yes, because on screen every character MUST have a specific appearance. But books can leave it up to us.

Don't let anybody inform you that you can't venture outside your own ethnic self-identification as you create characters.

Push your authorial envelope. For some of us, a risk is to avoid ethnic cues and clues and descriptors altogether as a purposeful technique to give room for the reader's imagination. For others, risky writing means striving to describe the ethnicity of our characters in a way we never have before.

10. Unleash your creativity when it comes to descriptions of appearance.

It's unanimous: stay away from food metaphors when it comes to describing skin color. Scrupulously avoid cliché when talking about a character's appearance.

Let's invent fresh ways of describing the human diversity on our planet, and set our young readers free to enjoy fresh ways of seeing it.