NOUGHTS AND CROSSES: A Look at Class and Race for UK Teens 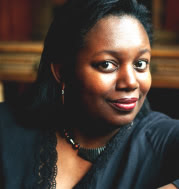 "Through my whole writing career it seems people have always been criticising me for not tackling racism. But things like even having black characters on covers when I first started was a bit of a political statement, because I've had more than one bookseller say to me 'that book would sell better if you didn't put black people on the cover'."

For years she wrote children's books that had "nothing to do with race," where the characters "just happened to be black," but her YA trilogy NOUGHTS AND CROSSES explores power dynamics by creating an alternate Britain where black Crosses dominate the white noughts:

"I wanted to play with people's preconceptions," she says, pointing to a scene where a nought child cuts herself and is forced to use a glaringly obvious brown plaster, because there are no pink ones available (an event which happened to Blackman, in reverse, as a child). "If you're the majority you don't necessarily see it because you don't need to see it and that's what I wanted to explore by turning the tables."

The book's been adapted as a script for the theater by the Royal Shakespeare Company (poster from the play below) -- an intense Romeo and Juliet story that might be a good choice for high school productions this side of the ocean. 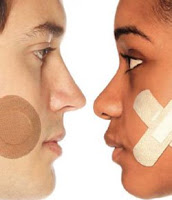