You're A Bit Too Oversensitive 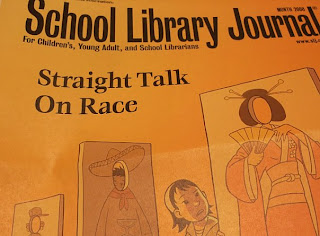 "Why not let kids be color-blind for as long as they can? Let's just let them read a story and enjoy it, for goodness' sake."

I'm predicting this response -- spoken or unspoken -- to my article releasing tomorrow in School Library Journal. And when I blog about these issues on the Fire Escape, I often ask myself whether I'm being "over-sensitive." Who wants to have a chip on her shoulder -- or be accused of having one? Not me.

That's why I was encouraged by the always-brave Debbie Reese's post today, in which she uses research reported in Science Daily to demonstrate how subtle racism in books can take a toll on American Indian children. If an educator asks the hard questions about race while reading a book in the classroom, wouldn't that be a relief to young people who must constantly process such questions alone?

Debbie's post led me to other studies, like this one, showing that children as young as preschoolers tend to follow majority opinion. It's a Lord of the Flies world on the playground, people. Or this one, where white people – including children as young as 10 -- avoided talking about race so as not to appear prejudiced. "But that approach often backfires," the researchers concluded, "As blacks tend to view this 'colorblind' approach as evidence of prejudice, especially when race is clearly relevant."

So let me ask you -- how young is too young to ask questions about racism while reading a story with kids? Have you ever done it? If so, when, why, and how?