Vocabulary For Conversations About Race 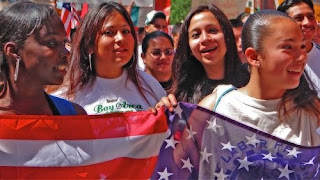 Lately, it seems that every word or phrase related to race sounds wrong or laden in certain circles. It matters who uses which words or qualifiers, and I worry that I'll get in trouble if I don't know the rules. Who makes the rules, anyway, and why do my teens seem to know them way before I do?

It might seem safer not to enter the discussion, but safety isn't always a good priority for an industry during times of change. The best way to innovate is to give each other freedom to make mistakes, and to trust one another. As artists, publishers, agents, publicists, librarians, and booksellers, we share the goal of getting stories and knowledge into the hearts, hands, and minds of young people. How do we best do that in a society with a heavy past, a tentative present, and an unwritten future when it comes to race?

Yesterday's call for questions about diversity in children's and YA books elicited great responses. I thought I'd post edited versions of the questions here in the hopes of getting more. I've italicized certain terms, however, signifying the challenge of ensuring we're on the same page as we hear or speak them.

Does it matter if an outsider writes an ethnic story if s/he does her research?

Why don't more books for early readers reflect a diversity of names? Does it sound contrived when a writer includes ethnic names?

E.B. Lewis, winner of numerous Coretta Scott King awards for his illustrations, has said that there's no such thing as an African-American painting. There are African-Americans who paint. Couldn't this also be said of writing?

Doesn't everyone bear the responsibility of including everyone in their art? Doesn't that mean that white people must write about people of color?

How can white writers be bold about including other cultures without fearing the label of cultural appropriation?

How do you meet the challenge of white agents/editors/publicists/librarians/booksellers serving as gatekeepers between writer and reader?

How much is it a publisher's responsibility to seek out multicultural books?

Which editors or imprints actively seek authors and illustrators of color?

Since so many editors--even at a multicultural press--are mainstream, what steps are being taken to at least achieve a level of (multi)cultural competence to aid in negotiations with minority writers?

How can white people in the industry successfully advocate for diversity without seeming to be "speaking for"?

Getting it to young readers

What makes a book multicultural, and does the label help or hinder sales?

Will the term multicultural literature be obsolete someday? Is that something to be hoped for, or avoided?

How can librarians influence publishers and authors to create books by and about children and teens of color?

As a white librarian, how do I make sure that my voice as an ally counts?

Isn't basing an award on ethnicity/race an essentialist practice?

Keep the questions coming, please. There's power in asking them. And if you think some of the words were mistakenly italicized because they're clear as glass to you, I'd like to hear your definitions. In fact, I'm desperate for them.