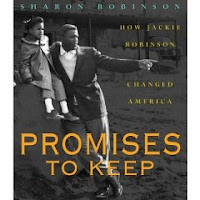 All 1000 or so Major League Baseball players in the United States are wearing #42 today to honor the great Jackie Robinson, who said, "A life is not important except for the impact it has on other lives."

Why not read the story of this hero as told by his daughter Sharon Robinson in PROMISES TO KEEP (Scholastic)? Listen to excerpts from an interview Ms. Robinson gave to Time For Kids:

How did he find the strength to continue playing even when people were insulting him and threatening his life?

He was committed to his overall mission, and his goals for creating change. He had a strong spiritual foundation, a strong mother, a strong, loving wife, and strong faith. All of those helped give him the strength to overcome those obstacles.

How was the atmosphere for a black player different back then?

Back then African Americans didn't have the option of playing in baseball's Major Leagues. You had to play in a separate league and that was unfair. It wasn't fair not to be able to play in the big leagues where the conditions were better. It was the ultimate dream for all baseball players to play in the Big Leagues. To be kept out because of color and not talent wasn't right.

Interestingly, Jackie Robinson's big brother Matthew won a silver medal in the 200-meter dash—just behind Jesse Owens—at the 1936 Olympic Games in Berlin. They were raised by a single mother, a hero behind the hero who wielded the proverbial "hand that rocked the cradle."

Branch Rickey, labeled the "Mahatma" for his strong faith, was also instrumental in Robinson's life. As President and General Manager of the Brooklyn Dodgers in 1945, he signed the first black player in Major League Baseball. "The thing about him was that he was always doing something for someone else," Robinson recalled at Rickey’s death in 1965. "I know, because he did so much for me."