We've been talking about books as windows and mirrors this week on the Fire Escape. First off, I'm convinced that "mainstream" North American kids and teens can and will enjoy books as windows into other worlds. We should expect them to as much as we do adult readers.

But I also believe that younger teens and tweens especially need to see themselves in stories. Here's an essay I wrote several years ago about about how such books might have helped during the stage when I was rejecting my culture of origin. It was originally published in Teaching Tolerance, and comes with a discussion guide they created for use in the middle school classroom. (Note: In the photo, that's me to the left of Baba.)

I had a magic carpet once. It used to soar to a world of monsoon storms, princesses with black braids, ferocious dragons, and talking birds.

“Ek deen chilo akta choto rajkumar,” my father would begin, and the rich, round sounds of the Bangla language took me from our cramped New York City apartment to a marble palace in ancient India. 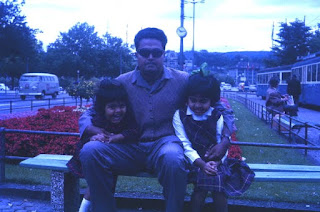 Americans made fun of my father’s lilting accent and the strange grammatical twists his sentences took in English. What do they know? I thought, perching happily beside him.

In Bangla, he added his own creative flourishes to classic tales by Rabindranath Tagore or Sukumar Roy. He embellished folktales told by generations of ancestors, making me chuckle or catch my breath. “Tell another story, Dad,” I’d beg.

But then I learned to read. Greedy for stories, I devoured books in the children’s section of the library. In those days, it was easy to conclude that any tale worth publishing originated in the so-called West, was written in English, and featured North American or European characters.

Slowly, insidiously, I began to judge my heritage through colonial eyes. I asked my mother not to wear a sari, her traditional dress, when she visited me at school.

I avoided the sun so that the chocolate hue of my skin couldn’t darken. The nuances and cadences of my father’s Bangla began to grate on my ears. “Not THAT story again, Dad,” I’d say. “I’m reading right now.”

My father didn’t give up easily. He tried teaching me to read Bangla, but I wasn’t interested. Soon, I no longer came to sit beside him, and he stopped telling stories altogether.

As an adult, I’ve struggled to learn to read Bangla. I repudiate any definition of beauty linked to a certain skin color. I’ve even lived in Bangladesh to immerse myself in the culture.

These efforts help, but they can’t restore what I’ve lost. Once a child relinquishes her magic carpet, she and her descendants lose it forever.

My children, for example, understand only a word or two in Bangla. Their grandfather half-heartedly attempts to spin a tale for them in English, and they listen politely.

“Is it okay to go play?” they ask, as soon as he’s done. I sigh and nod, and they escape, their American accents sounding foreign inside my father’s house.

“Tell another story, Dad,” I ask, pen in hand, and he obliges. My father’s tales still have the power to carry me to a faraway world. The Bangla words weave the same colorful patterns in my imagination.

My pen, however, like his own halting translation, is unable to soar with them. It scavenges in English for as evocative a phrase, as apt a metaphor, and falls short. I can understand enough Bangla to travel with my father but am not fluent enough to take English-speakers along on the journey.

My decision to leave mother tongue and culture behind might have been inevitable during the adolescent passage of rebellion and self-discovery. But I wonder if things could have turned out differently.

What if I’d stumbled across a translation of Tagore or Roy in the library, for example? “Here’s a story Dad told me!” I imagine myself thinking, leafing through the pages. “It doesn’t sound the same in English. Maybe I should try reading it in Bangla.”

Or, what if a teacher had handed me a book about a girl who ate curry with her fingers, like me? Except that this girl was in a hurry to grow up so she could wrap and tuck six yards of silk around herself, just like her mother did.

“Wear the blue sari to the parent-teacher meeting, Ma,” I might have urged.

Children growing up between cultures today have access to more stories than I did. A few tales originating in their languages have been translated, illustrated and published.

Characters who look and dress and eat like them fill the pages of some award-winning books. But it’s not enough. Many continue to give up proficiency in their mother tongues and cultures.

“Here’s a story from YOUR world,” I want to tell them. “See how valuable you are?”

“Here’s a book in YOUR language. See how precious it is?”

If we are convincing enough, a few of them might transport us someday to amazing destinations through the power of a well-woven tale.