Children's Books and a Changing Definition of Race 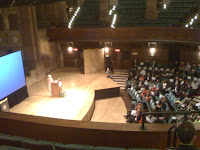 Last week I was privileged to hear Princeton President Shirley Tilghman deliver the Center for African American Studies' James Baldwin lecture called Race In The Post-Genome Era (that's my birds'-eye view from the balcony). Several of Dr. Tilghman's ideas jumped out at me:

At the level of the genome we're 99.9% identical to one another.

The classic view of race, based on physical characteristics such as skin color and facial structure, would have placed South Asians in a distinct racial group, yet the genome analysis identifies (us) as a genetic amalgam ... The biological, as opposed to the cultural, notion of race does not hold up to close scrutiny.

Genetic distinctions among individuals that we continue to define as members of different races based on physical and cultural characteristics are declining rapidly ... almost certainly because of intermarriage over the last 300 years.
As always, I wondered how this applies in the Kid/YA book world.

When it comes to writing books, as we imagine and pen our characters, doesn't this support a move away from using dated racial classifications in our third-person narrative voices? As I've said before, a character can get away with it in dialog or first person voice, but writer beware.

The scientific view of race is changing fast. Writing, packaging, and marketing, however, has to balance science's changing view of race with society's. Once again, we arrive at a familiar conclusion: our industry is going to require a new level of discussion, imagination, and flexibility to present books as mirrors and windows for a wide range of kids.

Academic experts like Dr. Tilghman are hammering out the complexities of defining race traditionally, culturally, socially, and genetically. But we're in the business of creating stories that shape the minds and hearts of a new generation when it comes to race. Shouldn't we be inside the tent? Listening, at least?

Here, for a start, is Dr. Tilghman's speech in its' entirety (it's long, but fascinating):