A Dozen YA Novels With Asian Guy Protagonists

Last week, I issued a call for YA novels published in 2007-2010 with Asian or Asian American guys as main characters. I got great suggestions, but didn't include any middle-grade titles, those published before 2007, or novels in which the Asian guy was a sidekick, romantic interest, or one of several protagonists.

It was tough coming up with a dozen books within those parameters. I haven't read all of them--in fact, I've only read three. The descriptions are publisher annotations.

Three of the titles have adopted heroes, three are graphic novels, and four are historical fiction. Half have Asian American main characters, with the rest of the books set completely in Asia. Note the lack of recent titles featuring teen guys with South Asian roots. And—apart from Lawrence Yep's and Laura Manivong's novels—there's not a whole, not-squashed Asian guy face on any cover (which is okay with me, as frequent Fire Escape visitors may recall.)

Here's the final list in alphabetical order by author:

When Yen Tzu-lu (nicknamed Lu) hears his grandfather speaking in Chinese with a mysterious white man named Jack Straw about some kind of mission, he never dreams that he will be plucked from his Mississippi River hometown to join it. Jack, a legendary gunslinger, is leading a group of roughnecks that includes a former slave who fought in the Union army, a Mexican outlaw and ex-Confederate John MacLemore and his daughter. They're out to reclaim a gold mine that MacLemore says belongs to him, and Lu has been hired as an explosives expert. (He's not, but only Jack knows that.)

2. ALL THE BROKEN PIECES by Ann Burg
(Scholastic 2009)
Two years after being airlifted out of war-torn Vietnam, Matt Pin is haunted: by bombs that fell like dead crows, by the family—and the terrible secret—he left behind.
Now, inside a caring adoptive home in the United States, a series of profound events force him to choose between silence and candor, blame and forgiveness, fear and freedom.

3. SOPHOMORE UNDERCOVER by Ben Esch
(Hyperion 2009)
For fifteen-year-old, adopted Vietnamese orphan Dixie Nguyen, high school is one long string of hard-to-swallow humiliations. He shares a locker with a nudist linebacker, his teachers are incompetent, and he's stuck doing fluff pieces for the school newspaper. But Dixie's luck takes a turn when he stumbles across one of the jocks using drugs in the locker room; not only does he finally have something newsworthy to write, but the chance to strike a blow against his tormentors at the  school as well.
However, when his editor insists he drop the story and cover homecoming events instead, Dixie sets off on his own unconventional-and often misguided-investigation. He soon discovers that the scandal extends beyond the football team to something far bigger and more sinister than he ever thought possible. Once he follows the guidelines of his hero, Mel Nichols (journalism professor at Fresno State University and author of the textbook Elementary Journalism) this high school reporter just might save the world. That is, of course, if Dixie can stay out of juvenile hall, the hospital, and new age therapy long enough to piece it all together.

Kimchi and calamari. It sounds like a quirky food fusion of Korean and Italian cuisine, and it's exactly how Joseph Calderaro feels about himself. Why wouldn't an adopted Korean drummer—comic book junkie feel like a combo platter given:

And now Joseph has to write an essay about his ancestors for social studies. All he knows is that his birth family shipped his diapered butt on a plane to the USA. End of story. But what he writes leads to a catastrophe messier than a table of shattered dishes—and self-discovery that Joseph never could have imagined. 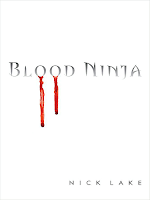 5. BLOOD NINJA by Nick Lake
(Simon and Schuster 2009)
Is Taro, a fisherman's son, destined for greatness? In the course of a day, Taro's entire life changes: His father is murdered before his eyes, and Taro is taken by a mysterious ninja on a perilous journey toward safety. Someone wants Taro dead, but who—and why?

With his best friend, Hiro, and their ninja guide Shusaku, Taro gets caught in the crossfire of a bitter conflict between rival lords for control of imperial Japan. As Taro trains to become a ninja himself, he's less and less sure that he wants to be one. But when his real identity is revealed, it becomes impossible for Taro to turn his back on his fate. 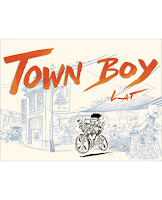 Malaysian teenager Mat makes a life-changing move from the quiet kampung where he was born to Ipoh, the rapidly industrializing nearby town.

Living far from his rural roots at a boarding school, he discovers bustling streets, modern music, heady literature, budding romance, and through it all his growing passion for art.

7. ESCAPING THE TIGER by Laura Manivong
(HarperCollins 2010)
Twelve-year-old Vonlai knows that soldiers who guard the Mekong River shoot at anything that moves, but in oppressive Communist Laos, there’s nothing left for him, his spirited sister, Dalah, and his desperate parents. Their only hope is a refugee camp in Thailand—on the other side of the river.

When they reach camp, their struggles are far from over. Na Pho is a forgotten place where life consists of squalid huts, stifling heat, and rationed food. Still, Vonlai tries to carry on as if everything is normal. He pays attention in school, a dusty barrack overcrowded with kids too hungry to learn. And he plays soccer in a field full of rocks to forget his empty stomach.

But when someone inside the camp threatens his family, Vonlai calls on a forbidden skill to protect their future, a future he’s sure is full of promise, if only they can make it out of Na Pho alive.

8. ZEN AND THE ART OF FAKING IT by Jordan Sonnenblick
(Scholastic Press 2007)

When eighth-grader San Lee moves to yet another new school, he plans to be totally different.

Then he accidentally answers too many questions in World History on Zen and all heads turn as San has his answer: He's a Zen Master.

And just when he thinks everyone is on to him, everyone believes him—in a major Zen way.

All Jin Wang wants is to fit in. When his family moves to a new neighborhood, he suddenly finds that he's the only Chinese-American student at his school. Jocks and bullies pick on him constantly, and he has hardly any friends. Then, to make matters worse, he falls in love with an all-American girl...

Born to rule over all the monkeys in the world, the story of the Monkey King is one of the oldest and greatest Chinese fables. Adored by his subjects, master of the arts of kung-fu, he is the most powerful monkey on earth. But the Monkey King doesn't want to be a monkey. He wants to be hailed as a god...

Chin-Kee is the ultimate negative Chinese stereotype, and he's ruining his cousin Danny's life. Danny's a basketball player, a popular kid at school, but every year Chin-Kee comes to visit, and every year Danny has to transfer to a new school to escape the shame. This year, though, things quickly go from bad to worse... 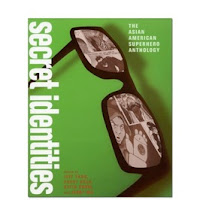 There's this guy we know--quiet, unassuming, black hair and thick glasses. He's doing his best to fit in, in a world far away from the land of his birth. He knows he's different and that his differences make him alien, an outsider--but they also make him special. Yet he finds himself unable to reveal his true self to the world . . .

For many Asian Americans, this chronicle sounds familiar because many of us have lived it. But it also happens to be the tale of mild-mannered reporter Clark Kent, better known as Superman. And the parallels between those stories help explain why Asian Americans have become such a driving force in the contemporary comics renaissance as artists and writers—and fans.

But there's one place where Asians are still underrepresented in comics: between the four-color covers themselves. That's why, in Secret Identities, top Asian American writers, artists, and comics professionals have come together to create twenty-six original stories centered around Asian American superheroes—stories set in a shadow history of our country, exploring ordinary Asian American life from a decidedly extraordinary perspective.

Best friends Cal and Barney are down and out in Chinatown. In the America of 1939, they are trapped by invisible barriers created by racial prejudice. With no jobs and no real homes, it's only their wizardry with a basketball that's let them survive this long.

That same skill suddenly flings a door open to fame and fortune when a professional basketball team, the Dragons, invites them to join the team. Soon they're barnstorming across America and taking on all comers—from local amateurs to other professional teams like the Harlem Globetrotters.

On that long, difficult road, they must battle rowdy teams and their even rougher fans on makeshift courts. Cal, aka Flash, and the team must also overcome terrible weather, crumbling highways, and their own disintegrating car. As the tour starts to fall apart, the tension between Cal and the team's jealous captain comes to a head. Suddenly Cal must choose between loyalty to his teammates and the pursuit of his own celebrity.

12. STOP ME IF YOU'VE HEARD THIS ONE BEFORE by David Yoo
(Hyperion, 2008)
Before he met Mia, resigned loser Albert Kim was too busy dodging high school sociopaths to imagine having a girlfriend. Much less the adorable ex-girlfriend of alpha jerk Ryan Stackhouse. Yet somehow, by the end of a summer working at an inn together, Al and Mia are "something."
Then September arrives with a thud: Ryan has been diagnosed with cancer and needs Mia at his side. As the school year turns into one giant tribute to Ryan, Al can't help but notice that Ryan may not be quite who everyone—particularly Mia—thinks he is. Before his heart shatters completely, Al has just a few more things to point out...