The Jane Addams Peace Association announced the winners of the 2010 Jane Addams Children's Book Awards today, and I'm delighted to introduce them on the Fire Escape: 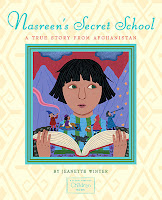 Nasreen’s Secret School: A True Story from Afghanistan, written and illustrated by Jeanette Winter, Beach Lane Books, an imprint of Simon and Schuster Children’s Publishing, is the winner in the Books for Younger Children Category.

Nasreen’s parents are gone, her father taken one night by soldiers, her mother lost on her search to find him. Now living with only her grandmother, Nasreen stays inside herself, silent with trauma. Whispers about a forbidden school reach her grandmother who, with stealth, bravery and hope, brings Nasreen to the secret school hidden in the home of an equally-brave woman, a teacher of girls. Framed stylized paintings in hues that symbolically reflect the path of Nasreen’s healing extend the story told in the plain, heartfelt voice of her grandmother. The power of education and resistance stand out in this all-too-true contemporary tale of the human toll exacted by war and the oppression of women. 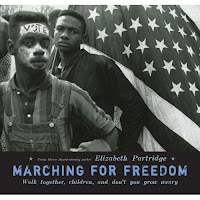 Marching for Freedom: Walk Together, Children, and Don’t You Grow Weary by Elizabeth Partridge, Viking Children’s Books, an imprint of Penguin Young Readers Group, is the winner in the Books for Older Children Category.

Marching for Freedom: Walk Together, Children, and Don’t You Grow Weary is a breathtaking tribute to the courageous, passionate African-American children who demanded voting rights through nonviolent action in the historic 1963 March from Selma to Montgomery. Riveting chronology, stunning photographs, and telling details from oral history interviews recreate the children’s anger, terror, solidarity and purpose moment-by-moment. This palpable sense of immediacy crystallizes the commitment of young people who acted on behalf of human rights when they were most frightened and “the end” was unclear and out of sight. Vital and forceful, this testament to the power of youth and collective nonviolent action inspires activism by delving deeply into the heart of a pivotal moment in the history of youth and civil rights in the United States.

Two books were named Honor Books in the Books for Younger Children Category. 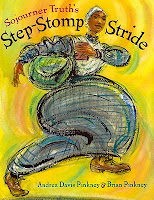 Sojourner Truth’s Step-Stomp Stride, by Andrea Davis Pinkney and Brian Pinkney, published by Disney-Jump at the Sun Books, is an honor book in the Books for Younger Children Category.

Born a slave in upstate New York, Sojourner Truth, an iconic figure in the abolitionist and woman’s suffrage movements, was “Meant for speaking. Meant for preaching. Meant for teaching about freedom.” Told with punch and vigor, this energetic picture book biography marches along with Truth as she frees herself from bondage and ultimately delivers her legendary women’s rights speech to a church filled with white men in 1851. Short storyteller-style sentences punctuated with exclamation points and meaningful capitalizations evoke Truth’s spirit and force. Illustrations in a palette of yellows alive with whirling lines keep the momentum, energy, sorrow, seriousness and fervor of Sojourner Truth’s unwavering quest for social justice front and center in an original rendering of this remarkable woman’s life. 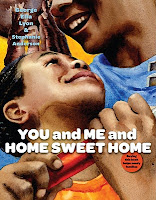 You and Me and Home Sweet Home by George Ella Lyon and Stephanie Anderson is a Richard Jackson Book/Atheneum Books for Young Readers, an imprint of Simon and Schuster Children’s Publishing, and an honor book in the Books for Younger Children Category.

Sharonda and her mother have been living in the back room of Aunt Janey’s apartment for more than a year now. When the pair’s church family declare that they are going to build them a house of their own, Sharonda responds: “Right . . . Like I’m going to tap dance on the moon.” Nurtured by Diane, the wise head of house construction, Sharonda benefits from shared work and a sense of community. Poetic text written in Sharonda’s voice captures the girl’s shifting emotions during the house-building process. Illustrations from many perspectives reinforce Sharonda’s growth in a blend of soft, primary and secondary colors held together by the brown tones depicting the African-American protagonist, her mother, the church family and the larger community.

Two books were named honor books in the books for Older Children Category. 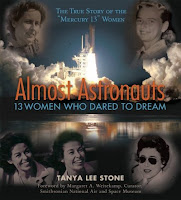 Almost Astronauts: 13 Women Who Dared to Dream by Tanya Lee Stone, is published by Candlewick Press and an honor book in the Books for Older Children Category.

Fifty years ago, in the midst of the race into space, thirteen women pilots performed consistently better than men on the battery of psychological and physical tests required to become astronauts—and did not become astronauts. The spirit, resilience and determination of this group of women, now called the Mercury 13, infuse this gripping, well-researched chronicle of overt and institutionalized sexism. Framed by the launch of the space shuttle Columbia in 1999, the first space shuttle commanded by a woman, this heartbreaking story of untapped talent and lost dreams emphasizes that no effort on behalf of human rights is lost; indeed, each movement toward equality helps the next one along. 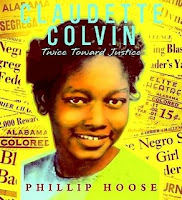 Claudette Colvin by Phillip Hoose, published by Melanie Kroupa Books/Farrar Straus Giroux, an imprint of Macmillan Children’s Publishing Group, is an honor book in the Books for Older Children Category.

This biography of Claudette Colvin, a teenager whose energy, drive, intelligence and thirst for justice pushed her to put herself on the line not once, but twice, in the battle for African-American civil rights. On her own, Colvin challenged Montgomery, Alabama, bus segregation laws through civil disobedience months prior to the challenge that tripped the massive 1955 boycott. And, with characteristic determination, she challenged them again through the courts as a plaintiff in the Federal class action suit that ruled bus segregation laws unconstitutional. Intricate history of the period based in impeccable research blends smoothly with Colvin’s own words and adult reflections on her life and actions. This substantive photobiography explores both the effects of Colvin’s activism on civil rights and the effects of the civil rights movement on her life.


Since 1953, the Jane Addams Children's Book Award annually acknowledges books published in the U.S. during the previous year. Books commended by the Award address themes or topics that engage children in thinking about peace, justice, world community, and/or equality of the sexes and all races. The books also must meet standards of literary and artistic excellence.