It started as a picture book, and after 10+ years of revisions and rejections, my novel Bamboo People launches today. Thanks to everybody who had a hand in it. I pray it sheds light on the young people forced to fight in Burma as well as on the Karenni refugees forced to flee that country. Many now live along the Thai-Burma border in camps and are beginning to come to the United States. In honor of them and those who advocate for them, I'll be tweeting links from great organizations all day. Check out #bamboopeople to track them.

And if you're in the Boston area, join us for an 8/19 Launch Party at Porter Square Books!

"A graceful exploration of the redemptive power of love, family, and friendship." —★ Publishers Weekly Starred Review

Chiko isn’t a fighter by nature. He’s a book-loving Burmese boy whose father, a doctor, is in prison for resisting the government. Tu Reh, on the other hand, wants to fight for freedom after watching Burmese soldiers destroy his Karenni family's home and bamboo fields.

Timidity becomes courage and anger becomes compassion as each boy is changed by unlikely friendships formed under extreme circumstances.

This coming-of-age novel  takes place against the political and military backdrop of modern-day Burma. Narrated by two fifteen-year-old boys on opposing sides of the conflict between the Burmese government and the Karenni, one of the many ethnic minorities in Burma, Bamboo People explores the nature of violence, power, and prejudice.

Get it at your local Indie Bookseller!

Send it lovingly gift-wrapped to anywhere in the United States for $14.18 from Indiepride — including tax and shipping. 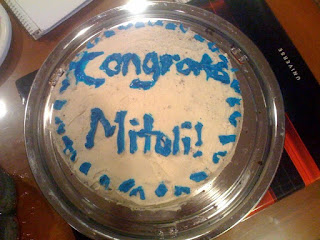 This cake by a middle school baker extraordinaire
was devoured at our writer's group last night. Thank you, Miss Emma!