Each year, the International Youth Library in Munich, Germany selects noteworthy, newly-published books from around the world and compiles them into the annual White Ravens Catalogue, introduced each year at the Bologna Children's Book Fair in Italy.

This year's collection contains 250 titles in 36 languages from 52 countries, and I'm thrilled that Bamboo People is one of the titles representing the United States. Here are the eight 2011 White Raven books from the United States, with the IYL's annotations:

Small, wild-haired, vivacious peanut-butter addict Bink and tall, lean, neat pancake baker Gollie are an odd pair of friends. Yet, even if their opinions on lots of matters diverge considerably, e.g. on whether “outrageously bright socks” are great or on whether a fish can be a marvellous companion, the two girls always find some sort of compromise in the end. This enchanting cross between picture book and first reader chronicles three of their adventures together in short, witty, fast-paced dialogue. The entertaining cartoon-like digital illustrations are mostly black and white with only occasional splashes of colour. They admirably bring the two protagonists and their world to life and make it easy for young readers to identify with the girls (and discuss the meaning of friendship). (2011 Theodor-Seuss-Geisel-Award) (Age: 7+)

In this virtually wordless picture book in black and white and yellow, Korean artist Suzy Lee explores the boundaries between the real and the imaginary world. The pages in the unusual landscape-format book flip from bottom to top instead of right to left with the top page initially representing the real world and the bottom page the silhouette-like fantasy realm until they blur into each other. The story takes off with a vivacious little girl in an attic surrounded by a clutter of objects that cast mysterious shadows on the floor. Soon the shadows take on a life of their own. The small protagonist pirouettes and jumps through a magical jungle scenery, is pursued by a wolf-like demon, escapes by creating a ferocious jungle monster, and… is suddenly whizzed back to reality by her parents’ call to dinner. This exuberant and carefully designed treasure will be read again and again and inspire children to initiate their own imaginary shadow-play world. (Age: 3+)

The protagonists in this coming-of-age novel are two adolescent boys living in modern-day multi-ethnic Burma. Frail and timid Burmese boy Chiko, who loves nothing more than reading books and hates physical violence, is abducted and forced to train as a soldier while his doctor father serves a prison sentence for allegedly resisting the government. Angry and tough Tu Reh, however, is a member of the Karenni people, an oppressed ethnic minority. Since his family had to flee to a refugee camp when Burmese soldiers burned down their village home, he is eager to join the fight against their violent oppressors. The two first-person narrations of this thought-provoking novel plunge readers into a frightening conflict zone and make them witness how the budding friendship between these two unlikely friends changes their view of the war and of people from other cultures. (Age: 14+) 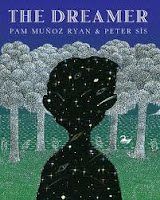 This absorbing fictional biography of renowned poet Pablo Neruda takes readers back to a small town in early twentieth-century Chile. Neftalí Reyes – which is Neruda’s real name – is a small and skinny boy, prone to daydreaming and fascinated by the wonderful things he discovers around him. His strict father, however, determined that his children work towards a successful career in a sensible profession, such as doctor or lawyer, forbids any imaginative or creative foraging and despises his son’s dreaminess. In a highly poetic text interspersed with philosophic questions and snippets of poetry imitating the style of the Nobel-prize-winning writer, Pam Muñoz Ryan reimagines Neruda’s childhood and youth; Peter Sís’s delicate pointillist illustrations in green and white perfectly capture the text’s atmosphere of magic realism.(Age: 10+) 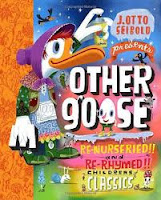 Mother Goose rhymes are probably the most widely-known nursery rhymes – not only in the English-speaking world. In his “Other Goose” collection, J.otto Seibold presents twenty-some of his favourite classics in awesomely illustrated new versions. From Humpty Dumpty and Little Bo Peep to the Cat with the Fiddle, Seibold’s “re-nurseried, re-rhymed, re-mothered, and re-goosed” variants include the same nursery-rhyme staff, but tell slightly twisted (or even completely mutated) tales compared to those with which readers may have grown up. The artist’s computer-generated, loudly coloured trademark illustrations show flat, goggle-eyed protagonists with distorted features. The pictures are brimming with witty allusions and amusing details that perfectly complement the quirky texts. (Age: 5+) 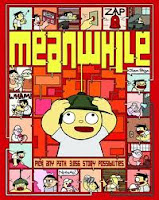 Choose-your-own-adventure books are nothing new, but this CYOA-graphic novel is on a completely different scale: Claiming to offer 3,856 different story possibilities, the book keeps readers flipping back and forth as they follow the picture sequences from right to left, left to right, up, down, across, and along differently coloured tubes. Although the story starts fairly simple with young Jimmy treating himself to some ice cream (either vanilla or chocolate), the adventure gets increasingly challenging, apocalyptic, and outright crazy as Jimmy meets an inventor and tests his memory-transferring SQUID, his time machine, and the killitron, which can eliminate the entire Earth’s population. Readers will love the puzzling paths and may even learn something about quantum physics, parallel universes, and entropy along the way. (Age: 10+) 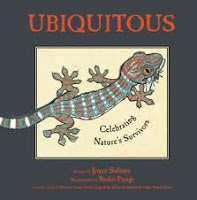 In their latest collaboration, Joyce Sidman and Beckie Prange continue the format of their award-winning “Song of the Water Boatman & Other Pond Poems” (2005). Delivering a combination of catchy poetry, informative science facts, and striking linocut illustrations, the author and illustrator let children in on the secret of successful survival on Earth during the past 4.6 billion years. Species as diverse as bacteria (3.8 billion years old), geckos (160 million years old), squirrels (36 million years old), and dandelions (5 millions years old) are gathered in this volume. Complemented by notes, a glossary, and a stunning timeline printed on the endpapers, texts and pictures provide readers with astonishing details about the most imperishable of our planet’s inhabitants. (Age: 5+)

When their father decides it is high time that his three little girls flew right across the country to Oakland (California) to visit their mother, Delphine, Vonetta, and Fern have mixed feelings. Yet little do they expect such a cold-hearted and disinterested welcome from poetry-writing Cecile, who abandoned them seven years earlier. Instead of caring for her daughters, she insists they spend their days at the nearby summer camp, where the girls are introduced to the Black Panther Party’s ideology. Set in 1968 against the backdrop of the African-American revolutionary movement and narrated from eleven-year-old Delphine’s point of view, this book tells the touching story of an unusual summer holiday during which the vivacious sisters learn a lot about black identity, their mother, and themselves. (Age: 10+)