Last weekend, I was privileged to speak at the tenth annual Wisconsin International Outreach Children's and Young Adult Literature Celebration. Here's my summary of the event on twitter via hashtag #wioc, followed by some photos.


K. T. Horning taking us "Around the World in 80 Days." pic.twitter.com/BMnOHdjj

Now that she understands the practice, she can share her love of ONLY ONE YEAR @LeeandLow

Atinuke's THE NO. 1 CAR SPOTTER is a new chapter book series featuring a Nigerian boy. (The author, who is adorable, is here.)

K.T. Horning ends with praise for WHILE YOU ARE SLEEPING by Durga Bernhard @charlesbridge, a book that travels the whole world.

Now storyteller Anne Pellowski is telling us a traditional tale from Turkey.

Pellowski mentions Bunko home-based libraries, apparently one of the finest social institutions in Japan. Anyone heard of it?

Drawing stories, where the teller draws and tells at the same time, ending with a surprise twist, are found throughout the world.

Another universal story genre is the "string story," told throughout the planet with a loop of string.

Sand stories are told by aboriginal women in Australia, a "mysterious and beautiful way to tell a story."

Handkerchief stories were told by old folks in Europe. pic.twitter.com/moJahDSw 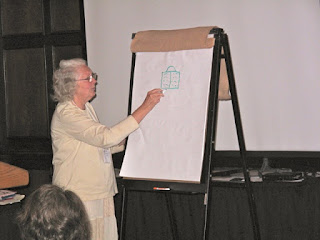