Belly-Banding TINTIN IN THE CONGO with a Warning 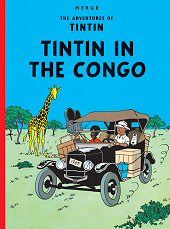 With Steven Spielberg's adaptation of THE ADVENTURES OF TINTIN, the classic graphic novel written and illustrated by George Remi (Hergé), Egmont UK is releasing TINTIN IN THE CONGO for a new audience. This time, instead of letting "colonial" content stand as is or bowdlerizing it, they've decided to pursue a new strategy:


“We took the unusual step of placing a protective band around the book with a warning about the content and also included an introduction inside the book by the original translators explaining the historical context."

Already, UK booksellers typically move the novels out of children's areas into the adult graphic novel sections of their stores.

We've discussed the option of bowdlerizing content on the Fire Escape before, and I took a poll, asking visitors to the Fire Escape when, if ever, it would be okay to update a classic children's book to reflect changing mores about race. The results (152 votes) were almost equally split between those who thought some changes might be in order, while the rest arguing that a book must stand as is.

What do you think about Egmont UK's belly-banding move? And if you're interested, here's how I weighed in on the issue. Enjoy the trailer for the film, scheduled for release December 21st: