The IBBY-Asahi Reading Promotion Award, initiated by the International Board on Books for Young People and sponsored by the Japanese newspaper company, Asahi Shimbun, is given every two years to two groups or projects making a lasting contribution to reading promotion for children and young people. The 2012 awards were announced on March 19th at the Bologna Children’s Book Festival, and the winners are: 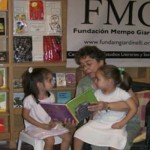 Abuelas Cuentacuentos (Storytelling Grandmothers), Argentina. This program is aimed at inspiring a love of reading in the country’s poorest children. Elderly people visit schools, orphanages, and hospitals to read stories aloud to children. These volunteers, mainly unemployed women between the ages of 50 and 70, delight in this new and productive way of sharing their time, affection, and talents as storytellers. 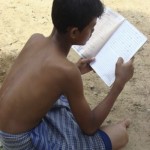 SIPAR, Cambodia. During the regime of the Khmer Rouge all books had been destroyed and their creators killed. No publishing houses existed in the country. In 2000, SIPAR (already working to build libraries across the country) started training workshops for publishing, writing, and illustration, mostly for children's books. Today SIPAR has a small Cambodian-run publishing department which has published 70 titles and printed 130,000 free copies for the 200 SIPAR libraries and students at teacher training colleges.

Here are all seventeen wonderful projects nominated for the 2012 IBBY-Asahi Award:
The next award will be in 2014 with applications due spring 2013. If you know of a project you would like considered or would like to read more about this award, go to your national section of IBBY. For those in the United States, contact members of the USBBY Asahi Reading Promotion Award Committee. I'm on the committee, so you can contact me or better yet, send an email to Pamela Jewett, chair of this year’s committee. You may also download an application from the University of Arizona School of Education's Worlds of Words website.

The prize money of US $10,000 for each winning project will be presented at the 33rd IBBY Congress in London, UK, at a special festive occasion on Thursday, 23 August 2012 at Imperial College London.