Why Ashton Kutcher's PopChips Ad Did Not Offend Me 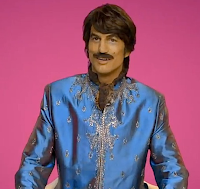 A recent ad featuring Ashton Kutcher was pulled by PopChips after it was labeled as "racist." Did it deserve the outcry? I don't think so. Could the writers of the ad have wielded the caricature with a bit more finesse? Definitely. Here are my three "ground rules" when it comes to the intersection of race and comedy (explored in the introduction to my forthcoming young adult humor anthology, OPEN MIC, published by Candlewick, Fall 2013):

1. Poke fun at the powerful, not the weak. The PopChips ad did this because Kutcher's character names himself as a Bollywood producer—representing an extremely powerful elite in India.

2. Build affection for the “other” instead of alienating us from somebody different. Basically, in the ad, the producer's a likeable guy—he's jolly and fun.

3. Be self-deprecatory. Here's how the commercial could have been improved: if Kutcher had poked fun at his real self at the end. For example, as he's sitting in his chair, he could have glimpsed an appropriately arrayed gorgeous girl strolling by with each of the characters (it might have been even funnier if they had mixed and matched styles, so the Indian girl was with the French guy, and the trucker girl was with the Bollywood guy, etc. ...  he could have even played the girls.) Meanwhile, the real Kutcher is left alone, waiting for his cellphone to ring—implying that the other three are actually confidently expressing their true selves, while he's a celebrity, which is essentially a caricature.

Because the ad didn't break rules 1 and 2, it didn't offend me. The real reason it didn't work is because of rule 3. What do you think?