I'm delighted to announce the winner of the 10th annual Mitali's Fire Escape Teens Between Cultures Prose Contest. In the past, I've award three prizes (first, second, third), but this year I decided to pick only one. Agonizingly, I narrowed the best entries to three and then asked my friend, author and teacher Cynthia Leitich Smith, to select the winner. Here it is—enjoy. 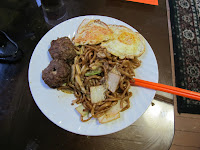 Chow Mein with a Chance of Meatballs
by Whitney S., Age 18

Growing up as the headstrong daughter of Chinese immigrants, I – surprisingly – didn’t question my parents’ strict emphasis on academic achievement. I didn’t fight back against the forced piano lessons, I didn’t begrudge the embargo on sleepovers, and I didn’t sulk (for long, anyway) when I brought home an A-studded report card and got only distracted nods in response. No, I accepted everything except the food.

I first realized my own gastronomical ignorance in elementary school, when my friends discussed their favorite restaurants and I could only name the two fast-food places I passed daily on my way to school. Before that, I had lived complacently under what I assumed were the unspoken, unquestioned rules of my household: No sodas, candies, or carb-based munchies could be found in the pantry. Breakfast, lunch, and dinner were served at prescribed times, with one afternoon snack of fruit and no nibbling allowed in between. Getting a hamburger from McDonalds was a twice-a-year treat for outstanding behavior (like winning a spelling bee) or consolation for a serious misfortune (like getting stitches when I cut my scalp open). And formal restaurants? I was lucky I knew what real, “Western” silverware looked like.

“Why don’t we ever eat out?” I demanded once, in a fit of indignation.

“Do you want to weigh 500 pounds? Americans put so much oil and flavorings in their cooking, it’s disgusting,” said my mother in dismissive Chinese. “And how much money we’d waste if we ate out every week, like American families do! Do you think we’re rich?”

My parents loosened up sometimes – if only to sample genuine Chinese restaurants where the owners and servers all spoke Chinese. They’d order standard mainland dishes, furrow their brows as they ate, and spend the rest of the night debating the authenticity of the food. For someone like me, with a sweet tooth and an adventurous appetite, it simply wasn’t enough.

I could pinpoint with 99% accuracy what we’d be having for dinner any given night, before even coming home from school. There was always the essential staple, rice. Then there was steamed or stir-fried bok choy (and if not bok choy, some other leafy green vegetable). Lastly, a meat dish, maybe mixed with more vegetables and maybe standing alone. On the rare occasions that we didn’t eat rice, we ate dumplings or noodles. And oh, how I hated fulfilling popular stereotypes – but we did all of the above with chopsticks.

My classmates complained about eating Brussels sprouts; they whined about not being able to have dessert before the entrée. My dreams (okay, perhaps my speculations when I got bored) were made of the stews, casseroles, lasagnas, pizzas, and steaks they ate at home. My peers gasped at the multisyllabic words I recited and rolled their eyes whenever I churned out another math problem at record speeds. How would they see me, though, if they knew that the great Whitney had no idea how to pay the check at a restaurant?

When my parents finally allowed me to carry pocket money around, I got sneaky. My middle school hosted a snack booth, and I felt a small high every time I purchased a forbidden pastry or soda. But it was immediately followed by an overwhelming cascade of guilt. I saw, in my mind’s eye, my mother lecturing me on how hard she worked to cook meals with minimal salt and oil, how much she despised “American” foods, which were inarguably fatty and unnatural. A part of me always hung her head in shame, promising never to venture down the road to sin again. The other part of me wanted to lash out against my parents. Was it really such a big deal if I deviated from their oh-so-precious customs here and there? I was a model child in every other department. Fortunately, I had never been bullied for my ethnicity; in my stubborn independence, I had rarely folded under the pressure to conform either. But this, the food – it was my way of saying Yes, I do want to be an American! I do want to share in a part, however trivial, of this society!

My parents started to relax their grip when I entered high school, most likely because they grew worried. “Stop studying so much, Whitney,” they told me. “You’re too stressed. Go out with your friends once in a while.” That, and once the trips I took with clubs dragged on past lunchtime, it became inevitable that my teammates and I would stumble into a restaurant. Learning basic skills like ordering from the menu and tipping etiquette were cheek-reddening experiences, mortifying both for me and my friends. I would explain awkwardly that my parents were traditional, that they – cue self-deprecating chuckle here – disapproved of American cooking, for some convoluted reason. I was lucky; most friends nodded and smiled and didn’t ask anything more. Their seeming acceptance soothed my insecurities, but not by much.

It was difficult for me, when I was younger, to justify my parents’ prejudices. How could they be so closed-minded? I thought angrily. Did they want our family to be outcasts? In my childish bravado, I would often proffer various favorites (“They’ll change their minds when they taste this spaghetti!”). As time passed and my parents kept turning away my offerings, though, I had to swallow the truth. They weren’t going to change. They were middle-aged immigrants; they had grown comfortable with their ways, which had endured the grueling transition to a different hemisphere.

But that doesn’t mean I have to remain a shut-in. My parents have begun to loosen their hold in this tug-of-war. I still keep a rigid diet at home, but I have been allowed to sample multicultural cuisines, even if it is always by myself and always out of necessity. My parents don’t understand it, but they are finally acknowledging it. For me, cultural immersion and exploration will always lie in the next order of macaroni and cheese.


Whitney on growing up between cultures:

The hardest thing about balancing two cultures is trying to fit in with other kids when you're young. Most kids now have been brought up to be tolerant and accepting of other cultures, but there are still those who are narrow-minded or just not ready to accept others who are different. I definitely felt a distance between me and other kids when I was young because of the different traditions I practiced at home.

The best thing about balancing two cultures is enjoying the added richness to your life when you're older. I can speak two languages, make authentic foods from different cuisines, enjoy two different styles of entertainment, and connect to people from two different ethnic backgrounds. Now that I can appreciate the depth that being both Chinese and American has brought me, multiculturalism has become a benefit rather than a burden.