Children's Books For and About Syrian Children

Looking for children's books featuring Syria? So am I. Fiction, especially, seems scarce. I managed to find one novel for teens written two decades ago, and another newer one which I discussed on the Fire Escape in 2007. (If you know of any other titles, please leave them in the comments section of this post.) 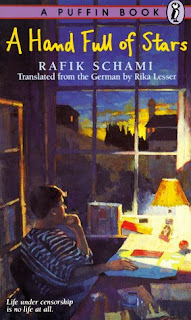 A Hand Full of Stars (Dutton, 1990) by Rafik Schami, translated by Rika Lesser, Winner of the Batchelder Award.

"This unusual novel, written in the form of a diary, tells the story of four years in the life of a Damascan boy. When he begins his account, the narrator spends his days playing with his friends and dreaming of becoming a journalist. Like many American boys, the diarist worries about his schoolwork and his girlfriend, but he must also cope with difficulties unfamiliar to his American contemporaries. Military coups are frequent occurrences and many of the neighborhood men have been sent to jail on the slimmest of pretexts. Taken out of school to work in his father's bakery, the boy finds another way to pursue his ambition by starting an underground newspaper. This multifaceted work is at once a glimpse into a different culture, a plea for the right to free speech and a highly readable tale, as full of fun as it is of melancholy." — Publishers Weekly, Ages 12-up. 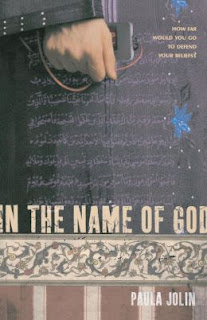 "Jolin's powerful and timely first novel transports readers to present-day Syria and explores how the hatred that young people feel towards Americans seems to fuel their willingness to become suicide bombers. Nadia, a respectable hijabi girl, lives in Damascus, where she fasts, prays, reads the Qur'an and covers her head. She is disgusted with her cousins' acceptance of Western culture ('Once again, Western values were intruding into my world and I was powerless to stop them'). Like her cousin Fowzi, Nadia believes that America's support of Israel and their fight against terrorism is contributing to the unstable conditions in Syria. Many young people, unable to find professional jobs, must seek work elsewhere, either in Emirates or the United States ('enemy number 2,' behind Israel). Fowzi tells them, 'How can you be responsible to the Muslims when you live in a state that's attacking them?' After Fowzi is arrested, Nadia feels compelled to fight against the American influences that resulted in his arrest, and agrees to be a suicide bomber. Readers will see that underneath Nadia's extremist idealism there is also a young woman with a romantic notion of saving her country, who doesn't fully realize the overwhelming consequences her actions will have on her family until it is almost too late. Though at times readers may feel they are being taught, this informative novel will get them thinking about another point of view." — Publishers Weekly, Ages 14-up.

Last month, Syrian children from the Zataari refugee camp in Jordan talked to the Guardian about their experiences during the civil war. As always, it's worth listening to the most vulnerable of voices:

Want to find out more? Books for Syria is producing fiction for the kids in the refugee camps, and a picture book called FAR FROM HOME by UK-based Samah Zaitoun has been a hit:

Also, the Arab Children's Literature Programme provides information about children's books in Syria, including a list of children's book authors and illustrators based in that country. And if you have no idea what's been happening in Syria recently, here's a good introduction from the Washington Post.