I'm so proud of the nine authors who collaborated with me on OPEN MIC: RIFFS ON LIFE BETWEEN CULTURES IN TEN VOICES (an anthology published 9.10.13 by Candlewick Press). I'll be featuring each of them in alphabetical order over the next month or so on the Fire Escape. 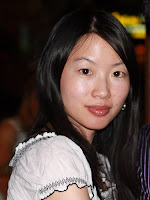 Today, I'm delighted to introduce you to the one and only Cherry Chevapravatdumrong (Cheva), author of "Talent Show," a short story that is third in the OPEN MIC lineup. Here's the first paragraph to whet your appetite:


Question: There are two high-school juniors in a room. They're waiting to audtion for the talent show. One is an Asian girl. The other is a white guy. One is tuning a violin. The other fiddles with a scrap of paper containing notes from a stand-up comedy act.

Which one is which?

Yeah, I know what you'd say. That's what I'd say, too, except that I happened to be the guy. Holding the violin.

The Horn Book loved her contribution:  "In Cherry Cheva’s story, an Asian girl and Jewish boy take hilarious not-very-PC jabs at each other while nervously waiting to audition for a talent show.” And  Publisher’s Weekly said: "The edgy joke-flirting between a Jewish violinist and Asian comedian in Cherry Cheva’s ‘Talent Show’ and the hero of David Yoo’s ‘Becoming Henry Lee,’ who comically embraces Asian stereotypes in an effort to fit in, will leave readers thinking about the ways that humor can be a survival tool in a world that tends to put people in boxes.”

Originally from Ann Arbor, Michigan, Cherry is the author of two novels, She's so Money and DupliKate, and the co-author, with Alex Borstein, of It Takes A Village Idiot, and I Married One. She lives in Los Angeles, California, and is a writer and producer for Family Guy. If you've never watched the show, here's what Fox had to say about it:


Entering its 11th season, FAMILY GUY continues to entertain fans with its shocking humor, infamous cutaway gags and epic episodes. Since its debut, the show has reached cult status among fans, and its breakout star, a talking baby, has become one of the greatest TV villains of all time. FAMILY GUY has racked up numerous awards, including an Emmy Award nomination for Outstanding Comedy Series, only the second animated series in television history to be honored with such a distinction.

"A lot of people watching the Family Guy credits think my name is fake," says Cherry. "It's not. It's just Thai."

Contact or find out more about the marvelous Cherry Cheva: