I'm delighted to announce the winner of the 11th annual Mitali's Fire Escape Teens Between Cultures Prose Contest. In the past, I've award three prizes (first, second, third), but this year I decided to pick only one. Here it is—enjoy. 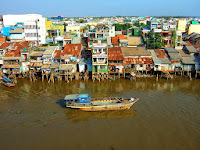 
“It was a rough marriage. She left him...” My mom spoke into the phone in Vietnamese, “Poor thing, he lives alone now. He rents the house from an old landlady.”

“Is she talking about Chú Bích?” I asked my sister from the backseat.

Chú Bích is my uncle—”chú” implied that he was my dad’s younger brother. I can’t recollect any memory of him but I distinctly remember getting trouble for stealing a picture of him and his bride because it was the prettiest thing five year old me had seen. He had let me keep it and take it with me to America. It still sits in one of the many dusty albums closed away in my parents’ bedroom.

I stared out the window on the drive home, but still intently listening to the conversation, trying to glean as much information as I could. We were driving home from Wal-Mart where we had loaded up on supplies for our upcoming trip to Vietnam.

“Candy,” my mom said as she rushed to that very aisle, “We have to buy a lot of candies to give to the kids over there.”

I finally understood--even candy was a luxury for them. This made me anxious, this unfathomable disparity between living standards. What if I was seen as too snobby? And worse yet, what if I wasn’t able to conciliate with the conditions there? However, despite these worries, I looked forward to the trip.

It was our family’s first return in nearly ten years and mine since I was five years old. The first five years of my life, I can barely recollect even as I searched into my deepest archives.

The memories I still held on to were like vivid snapshots—memories of eating mãng cầu on the doorsteps of our pastel colored home, facing our neighbors’ houses across the narrow street; of holding onto my sister’s hand as we walked around the corner to a ma and pop store to buy our favorite snacks; of the old peddler lady who sold my favorite dessert, Chè đậu đen, the kind with the soft and chewy black beans. They were fleeing memories, moments captured within the seconds that somehow managed to escape the doom of time. They were all I had, yet they weren’t enough.

During this trip, I was able to replenish my remembrance. Many of these recollections consisted of beautiful sceneries, from the dusty, unpaved roads of the countryside to boundless night skies; moreover, there were the nostalgic memories of the names and faces of whom I had never met, yet inexplicably had played a part in my family’s past. But perhaps the most profound experience was the two week stay in Saigon at Chú Bích’s two-room home, varnished with blue and green floor tiles. It was on these tiles that I had helped lay out breakfast each morning; on these tiles I had taught my cousins to play Double Speed, a card game that we played zealously at every free moment we had. In a place that was so different from what I was accustomed to, I had found comfort and a familial love that resonated through its walls. I couldn’t fully understand all the struggles or pain he had gone through, but Chú Bích had welcomed us into his home and gave us all he had. He represented a fragment of Vietnam that, in my naivete, I failed to grasp: through all the turmoil and difficulties, he still had the strength to love and the perseverance to toil on. Within these weeks, my sense of materialism tumbled away, and all that was left were the people that I love and the place that I had come from.

That summer, I fell in love with Vietnam. Struggling to find its own economic standing, It is a country ravaged by internal conflict, but it was my own. That summer, I found a missing piece of my childhood, and a neglected piece of myself.

In all my struggles and perseverance to do well in my studies and strive to attend the best colleges in America, I had forgotten much of my roots, as Vietnamese classes gave way to school projects during the weekend and cultural festivals gave way to study dates at Starbucks. My parents, in their struggle to survive in a foreign country and raise their two daughters, could not afford the time to reinforce what they had so cherished. They gave up everything they had—money, family, childhood friends— for the sake of my future. However at some point, I realized that I was old enough to understand the importance of tradition and heritage. It was now my own responsibility to not only preserve my roots, but bridge the gap between the country I was born in and the one I live in.


Tran on growing up between cultures:

For me, the hardest thing about balancing two cultures is simply that, keeping the balance. While I am perpetually adapting to and being immersed into one culture, I also have to be careful not to lose touch with the other culture. Not only do I feel obligated to fit in with my family and my friends, I also have to be able to come to terms with myself as a middle point between two cultures. At times, it is a difficult dichotomy to maintain, but at the end of the day, it is something to be proud of.

The best thing about having two cultures is that it allows me to be more open minded, because I am more familiar and comfortable with the idea of 'different'. Having already experienced these two spheres of culture, American and Vietnamese, both of which are quite different from the other, it is much easier for me to grasp that there are thousands of different spheres of culture in the world, each with its own idiosyncrasies.