I'm proud to showcase the nine authors who collaborated with me on OPEN MIC: RIFFS ON LIFE BETWEEN CULTURES IN TEN VOICES (an anthology published 9.10.13 by Candlewick Press). Publishers Weekly had this to say about our book:


... As Perkins notes, “Humor has the power to break down barriers and draw us together across borders,” and the stories within bear that out ... In “Under Berlin,” written in verse, G. Neri describes a “game” that a biracial American family plays on the German subway: seeing how quickly two elderly white women will change seats after the black father sits between them ...

Today I'm delighted to introduce you to my friend Greg Neri, author of "Under Berlin," a story in verse that's eighth in the OPEN MIC lineup. Here are a few paragraphs from the middle of the piece that showcase Greg's mastery of voice:

"Why can't we take a taxi?" I ask.
"You all gonna pay for it, Reina? asks Daddy,
his southern twang
more out of place
than we are.
We move slowly across the platform,
pushing into the overcrowded train car.
"Sure, I'll pay,
just as soon as I start my own
currywurst stand."
I can still smell it from here.
My brother, Oscar laughs. "Yeah, right."
I stare at his pudgy face,
trying not to get squished
by the rush-hour stampede.
"What's so funny?" I say.
Oscar laughs again.
"A black American girl
servin' up German sausage?
Sure, that's not funny
at all."
"I'm not black," I say. 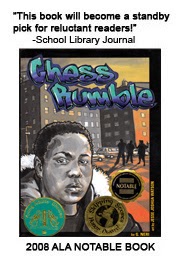 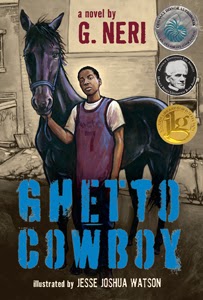 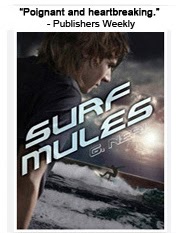 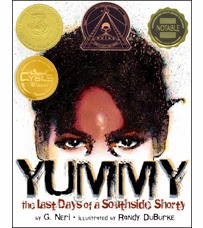 "Some people are curious about my ethnic background," says Greg. "Well, I'm Mexican, Filipino and Creole (French, African, Spanish, Native American) or as we say Crefilican-American or more accurately Nafranishafripinocan (go figure). Actually, I feel I am a great example of globalization. The Mexican side covers the Hispanic countries, Filipino represents Asia, Creole covers Europe, Africa and North America."

Find out more about Greg and his work by following him on twitter or facebook, or by visiting his site.