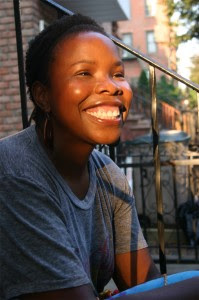 I'm proud to showcase the nine authors who collaborated with me on OPEN MIC: RIFFS ON LIFE BETWEEN CULTURES IN TEN VOICES (an anthology published by Candlewick Press). Today's spotlight is on writer Olugbemisola Rhuday-Perkovich (sometimes known as Gbemi.) Publishers Weekly had this to say about our book and, more specifically, about Gbemi's contribution:


"... Ten writers and artists, including Varian Johnson, Naomi Shihab Nye, and Francisco X. Stork, offer brief works of fiction and nonfiction “about the between-cultures life.” As Perkins notes, “Humor has the power to break down barriers and draw us together across borders,” and the stories within bear that out... Most offer a subtler, uncomfortable brand of situational humor: Olugbemisola Rhuday-Perkovich calls her high school 'an oasis of suburban racial integration'; when the drama club performed The Crucible, 'the drama coach was sensitive enough to ask the black members of the troupe if we’d be uncomfortable playing the role of slave Tituba.' ..."

Here are the opening lines from "Confessions of a Black Geek," her memoir in OPEN MIC.

... In high school, my friends and I owned two words—we were Black, and we were geeks. We had the soundtrack to prove the first: classic Nina Simone and Aretha Franklin renditions of "Young, Gifted, and Black." That song was as much a part of my regular diet as the lumpy and not-sweet-enough porridge I had for breakfast many mornings. My mom was an Excellence for Black Children mother, which meant that she battled for Parent-of-a-High-Achiever supremacy at monthly meetings and was quick to whip out the dashiki and boom box so that I could dance interpretively alongside my equally gifted and well-mothered friends at the annual Martin Luther King Jr. breakfasts ...

Don't you want to keep reading? Find out more about Gbemi's award-winning novel 8th Grade Superzero, which was named a Notable Children’s Book for a Global Society and a Notable Social Studies Trade Book for Young People. You may also eavesdrop on a chat between the two of us here on the Fire Escape. "I was the new kid at school many times over, in more than one country," says Gbemi. "I now live with my family in Brooklyn, where I write, make things, and need more sleep."