KQED Hosts a Panel on Children's Literature and People of Color

On Monday, I was honored to be part of a group invited by KQED Forum to speak on the radio about the Cooperative Children's Book Center's (CCBC) 2013 findings on diversity in children's literature. I joined host Mina Kim, Nina Lindsay, children's librarian at Oakland Public Library, and illustrator LeUyen Pham in the studio. K.T. Horning of the CCBC provided a pre-recorded introduction, and Christopher Myers, whose recent New York Times article, "The Apartheid of Children's Literature," precipitated the public interest, joined us live from Brooklyn.

Let me offer some thoughts on live radio. First, it moves fast—the hour barreled by. Second, a good host must be excellent at multi-tasking; it was fascinating to watch Mina's brain and body move in marvelous synchronicity as she steered the conversation. Three, you can't edit your words.

I said things with which I generally agree but left wishing I could have tweaked a sentence or two. For example, I wish I could clarify that I encourage authors to hold back from writing main characters from historically marginalized communities if we didn't grow up in those communities. And that I invite us to hold back only to ask tough, self-reflective questions about the reasons to write that story—as all powerful storytellers must when writing about less powerful children—but that I see no hard and fast rule about who can write for whom.

Afterwards, to celebrate that it was all done, LeUyen and I partied with Big Bird, and I schmoozed with the aristocrats of Downton Abbey. 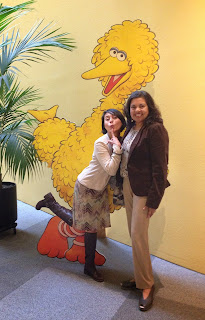 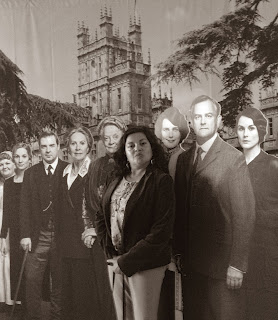 Here's the show, or you may listen below if you'd like.