This summer, as kids set up lemonade stands, car washes, and dog walking services, consider inspiring them to give a portion of their entrepreneurial proceeds to the children of Nepal.

Before the earthquakes, Nepalese were working fiercely to increase the literacy rate by building libraries across the country. Apart from our sorrow over the loss of life during and after the disaster, we also grieve a devastating setback in the country's efforts to progress in education.

We can help rebuild education and literacy in Nepal. Why not read a book featuring that beautiful Himalayan country with your children, Girl Scout/Boy Scout troop, summer reading program, Sunday School or Vacation Bible School class? Then encourage them to raise money for an organization working to rebuild libraries and literacy in response to the earthquakes. Check out a few choices below (reviews courtesy of School Library Journal), and please add more options for good books to read and organizations to support in the comments.

K-Gr 3—While shopping in the marketplace, Chandra and her sister, Deena, watch a man selling solar lights. Because few have electricity, at home, Nepali families use tukis, or kerosene lamps, that are very smoky and produce unhealthy fumes. Although the solar lamp is expensive, the girls are certain that it would help quiet their baby brother's smoke-induced cough. They excitedly share the information about the "magic light" with their father. However, it isn't until he sees one working at a neighbor's house that he becomes interested. The new lamps cost more than the family has available, so the girls brainstorm ways they can earn the money. They decide to sell bunches of colorful rhododendrons that grow in the hills. Arriving early to market, Deena has time to tell Chandra a story of the sun god, Surya, and the moon god, Chandra. The young girl is proud to be named for such a powerful god. The girls' stall does well, and they are able to purchase the last solar light available. That night, their little brother sleeps and breathes peacefully. The full-color, mixed-media illustrations dominate the pages with vitality and detail. Thorough endnotes provide much information about Nepal, its people and solar power as well as instructions for making a solar oven. This tale of sibling compassion and ingenuity provides enough story for enjoyment alone but would also work well as an introduction to another culture and religion. — Sara-Jo Lupo Sites, George F. Johnson Memorial Library, Endicott, NY, School Library Journal 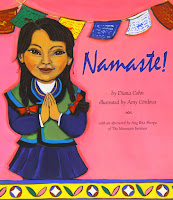 K-Gr 2 — Nima lives in the mountain country of Nepal. Every year her father has to leave to work as a mountain guide for climbers from around the world. The child and her mother part from him with prayers and rice offerings, and by placing a khata, the traditional shawl, around his neck for good luck. Then Nima walks to school. Along the way, she greets yaks, tourists, porters, traders, and Tibetan monks with a "Namaste" by bringing the palms of her hands together and bowing slightly. This greeting translates into "the light in me meets the light in you," and readers soon learn that Nima brings light to everyone around her. The vibrant folk-art illustrations showing the details of Nima's life in her village support the simple story perfectly. This beautiful book will appeal to primary readers and make an ideal addition to multicultural collections. An extensive glossary explains Nepalese terms, and an afterword gives background on Nepalese culture. — Monika Schroeder, American Embassy School, New Delhi, India, School Library Journal 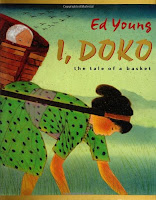 I, Doko: The Tale of a Basket, written and illustrated by Ed Young, published by Philomel, November 2004.

K-Gr 3 – This fable begins at the marketplace, when a young father chooses a new basket for his family. Told from the point of view of the basket, the story proceeds as the baby boy grows up, the man's wife dies, and the son marries and has a family of his own. Through the years, the basket carries infants, crops, and even the woman's body to her grave; it becomes part of the family in a very fundamental way. At last, the father is a disabled old man and his son proposes to leave him at the temple so the priests will have to take care of him. The basket is consigned to carry him there, until the grandson intervenes with a haunting question that offers the moral of this traditional tale from Nepal. A quote from Kung Fu Tze in the sixth century B.C. opens the book: "What one wishes not upon oneself, one burdens not upon another." The simple text offers a splendid backdrop for the beautiful illustrations. Done in gouache, pastel, and collage, the pictures have graceful lines, subtle textures, and magnificent colors. With gold endpapers and gold edgings around each page, there's a timeless quality suited to the story. Lovely. – Lauralyn Persson, Wilmette Public Library, IL, School Library Journal

Sold by Patricia Mcormack, published by Hyperion Books for Children, 2008.

Gr 9-Up – As this heartbreaking story opens, 13-year-old Lakshmi lives an ordinary life in Nepal, going to school and thinking of the boy she is to marry. Then her gambling-addicted stepfather sells her into prostitution in India. Refusing to be with men, she is beaten and starved until she gives in. Written in free verse, the girls first-person narration is horrifying and difficult to read. In between, men come./They crush my bones with their weight./They split me open./Then they disappear. I hurt./I am torn and bleeding where the men have been. The spare, unadorned text matches the barrenness of Lakshmis new life. She is told that if she works off her familys debt, she can leave, but she soon discovers that this is virtually impossible. When a boy who runs errands for the girls and their clients begins to teach her to read, she feels a bit more alive, remembering what it feels like to be the number one girl in class again. When an American comes to the brothel to rescue girls, Lakshmi finally gets a sense of hope. An authors note confirms what readers fear: thousands of girls, like Lakshmi in this story, are sold into prostitution each year. Part of McCormicks research for this novel involved interviewing women in Nepal and India, and her depth of detail makes the characters believable and their misery palpable. This important book was written in their honor. – Alexa Sandmann, Kent State University, OH, School Library Journal

A film based on McCormick's award-winning novel, Sold: The Movie, produced by Emma Thompson, is available for screening. Here's the trailer.

READ has its roots in Nepal, where their first office opened in 1991 after a rural villager told the organization's founder that all he wanted for his village was a library. Since then they have opened READ Centers across the country, offering training programs in livelihood skills, literacy, health, and technology. With partner communities, READ has seeded sustaining enterprises that address community needs: from fish farming and turmeric farming to a community radio station. Almost 4,000 women participate in savings cooperatives at READ Centers in Nepal.

In 1998, Room to Read's Founder, John Wood, delivered his first few hundred books to a school high in the Himalayas, and the organization—then known as Books for Nepal—was born. Since then, Room to Read's local team has expanded operations in the country to include school libraries, reading and writing instruction, school construction, book publishing and girls’ education. They now work in both the Himalayan region and the lowlying Tarai flatlands to improve educational opportunities for Nepal's children.

The Alex Lowe Charitable Foundation maintains seven rural libraries in Nepal, and is seeking to build more. Once books arrive in Nepal, volunteers sort through them and divide them between the libraries. Books are either flown or taken by truck to the trail head and then loaded onto yaks, dzopkyos, donkeys, horses or people who carry them to their remote destinations.

For an overview of Nepalese Children's Literature, check out History of Children’s Literature In Nepal by Biswambhar Ghimire (Chanchal), courtesy of the International Board of Books for Young People.