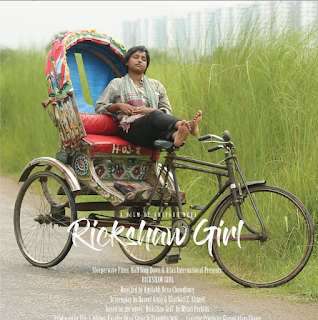 Thrilled to share the official trailer for Rickshaw Girl, based on my novel of the same name. The film, which releases fall of 2021, is directed by Amitabh Reza Chowdhury, produced by Eric J. Adams of Sleeperwave Films, and stars Novera Rahman as Naima. Enjoy!

The film will compete at the Durban International Film Festival, one of the largest and oldest festivals in the southern hemisphere. Of the 3000 films submitted, only 100 features were accepted, and of those, only eight are in competition for “Best Feature Film.” Rickshaw Girl is one of them! It has also been accepted to the International Film Festival of South Asia in Toronto, the largest South Asian Film Festival in North America, and we are waiting for news from other festivals as well. Depending on how well it does in those venues, we'll know about theatrical releases in the fall. Can you tell I'm excited? I hope you are, too! Find out more at rickshawgirlmovie.com and search for the hashtag #rickshawgirlmovie on social media.