Between Us and Abuela

BETWEEN US AND ABUELA, a picture book, is illustrated by the amazing Sara Palacios. Here's how to ORDER, and feel free to scroll down for reviews and resources. 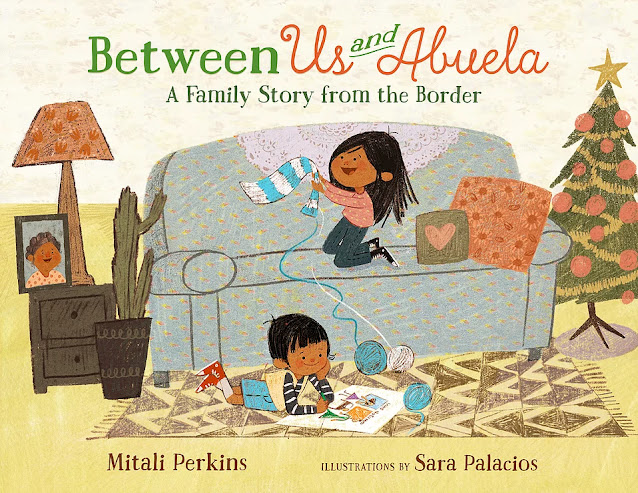 Winner of the Américas Award
ALA Notable Children's Book
Notable Social Studies Trade Book
NCTE Charlotte Huck Honor Award
Center for the Study of Multicultural Children's Literature Best Book of the Year
California Golden Poppy Award Best Picture Book
Nominated for Arizona's Grand Canyon Book Award
Nominated for Illinois' Monarch State Book Award
Nominated for Virginia's Reader's Choice Award
Nominated for South Dakota's Prairie Bud Award
It's almost time for Christmas, and Maria is traveling with her mother and younger brother, Juan, to visit their grandmother on the border of California and Mexico. For the few minutes they can share together along the fence, Maria and her brother plan to exchange stories and Christmas gifts with the grandmother they haven't seen in years. But when Juan's gift is too big to fit through the slats in the fence, Maria has a brilliant idea.
REVIEWS

"...Maria; her little brother, Juan; and their mother take a bus to the U.S. side to hear the Christmas story, sing carols, worship with other separated families, and have a fleeting face-to-face moment through the fencing with beloved Abuela, who has traveled from her Mexican village to see them for the first time in five years ... Cartoon drawings emphasize the resilience of Abuela and her family as they navigate the border landscape, the impenetrable wall, and a situation that feels unfathomable—but is, unfortunately, all too based in reality." ― Publishers Weekly, starred review

"A story of family strength and unity overcoming fences along the Mexican/United States border ... Another poignant piece to add to the current national discussion about the border. A must for any collection." — Lucia Acosta, School Library Journal, starred review

"Mitali Perkins’ story is a perfect introduction for children to how borders separate families, delicately embracing the reunion’s joy and enduring sadness. Sara Palacios’ illustrations cheerfully capture the love among separated families as well as the realities of the border wall. This superb picture book is a holiday story that deserves to be a year-round read." — BookPage, starred review

"This touching contemporary story sensitively focuses on the U.S.–Mexican border and Mexico's cultural traditions in a heartwarming, informative, and hopeful way ... Perkins gently voices some of the challenges families can experience when they are separated by a border: physical limitations, time limits, and surveillance exacerbate the already difficult distance between loved ones. Maria’s inventive solution to that distance will make readers cheer, and Palacios’ warm illustrations in saturated colors make the scenes vibrant with feeling and quietly fold in informative visual details about the border and the family’s cultural traditions." ~ Vivian Alvarez, ALA Booklist

"Our kid reviewers were immediately invested in this story of a family from San Diego that takes a bus to meet Abuela (whom they haven’t seen in five years) at the fence along the border." ‬⁩— Parents Magazine

"The subdued, warm-hearted, sand-and-sea-toned illustrations show the family members able to see each other and touch hands through the links—and María longs to give her abuela the gifts she and Juan brought ... a heartwarming, culturally specific, and hopeful family holiday story. Perkins’s lyrical text, with occasional words in red or blue for emphasis, incorporates some Spanish words and phrases. An informative author’s note adds context." — Horn Book

“A bittersweet story based on the real-life tradition that’s been running at the border for over twenty years ... There’s a mid-mod flair to the jaunty figures and mustard and blue palette of the digital art; the geometry of the fence anchors most spreads but the wildness of beach and sky and the smiling faces of celebrants counterbalance it ... an excellent prompt for discussion ...  [and] a cliché-busting holiday book that could deepen a unit on celebration." ~ Bulletin of the Center for Children's Books recommended title

"Between Us and Abuela reminded me of Hans Christian Andersen’s story 'The Emperor’s New Clothes,' in its lighthearted mockery of the impotence of powers that be. Perkins’s story is undoubtedly more subtle than Andersen’s, but it is no less powerful (and certainly more timely) in its revelations. Hope is hard to come by in these dark days of the late modern era, especially hope that isn’t cheap and isn’t founded in falsehoods, but hope is precisely what Mitali Perkins offers ..." — Englewood Review of Books

"Reading about a real place in San Diego makes this book exceptionally poignant. You can easily imagine yourself standing on your side of that wall looking eagerly for your own loved one. You can feel how hard it must be not to be able to hug and touch your grandmother ... A beautiful story of how we hold our family in our hearts and how being with them is treasure that cannot be measured. A powerful story of how painful and harsh it is to be separated from them. A brilliant story about finding a way to connect the two sides." ~ A Book and a Hug

"La Posada Sin Fronteras occurs on one day during Las Posadas, a festival celebrated in Mexico which commemorates how Mary and Joseph found no room in the inn on the night of Jesus’ birth. Timely and sensitive, this brightly illustrated children’s book reflects the reality of many people living in the United States today who are separated from those they love." ~ Christian Courier

"Maria and her little brother Juan are going to see their grandmother at the U.S.-Mexico border for La Posada Sin Fronteras, a holiday celebration. Abuela is on the Mexico side and Maria, Juan, and their mother are on the U.S. side. But this one day, they are allowed to visit with her and talk through the fence. It's lovely how Maria only vaguely remembers her abuela's voice, but the love between all of them is so evident." ~ Romper

Las Posadas is a nine-day festival celebrated throughout Mexico and in other countries from the 16th of December until the 24th of December. It is a time to remember the birth of Jesús and how his parents, María and José, searched for shelter on the night he was born. Turned away from the inns of Bethlehem, María gave birth to her baby and laid him in a manger. Every night during Las Posadas, two people dress up as María and José. A procession of people holding candles and poinsettas join them to knock on the door of an “inn” or “Posada.” On these nights, though, unlike that long ago night in Bethlehem, the Holy Family and their companions are welcomed, sheltered, and feasted.

La Posada Sin Fronteras (“The Inn without Borders”) is celebrated on one day during Las Posadas along the border between Mexico and the United States of America. People in Tijuana work with people in San Diego to plan the event, and I'd heard about it through friends who have been involved. For over a quarter of a century, friends and families gather in Friendship Park in San Diego and in Playas de Tijuana by the lighthouse in Tijuana. They sing traditional Posada carols, hear the stories of migrants living in the United States and in Mexico, and listen in silence to the naming of migrants who died trying to cross the border. Participants from many church traditions worship on both sides of the border with the primary border wall between them. On the US side, they stand in the area known as the enforcement zone, between the primary and secondary border wall, under the surveillance of Border Patrol officials.

When I was a child and a newcomer to California, the border between San Diego and Tijuana didn't look like it does today. In 1971, First Lady Pat Nixon established Friendship Park. One of her security officers cut the barbed wire, and she crossed the border to hug Mexican children, saying, “I hope there won’t be a fence here too long.”

Unfortunately, our relationship with Mexico has gone in the other direction, fences, walls, and barriers have proliferated, and Friendship Park is now rarely opened. One of the times when people still meet there is during La Posada Sin Fronteras, and in the face of the deteriorating relationship between the U.S. and Mexico, the event seemed like a beacon of hope to me. This story is a fictional portrayal of that cross-border celebration. In that walled setting, during one of those many gatherings since 1993, we imagine one family separated by the border trying to share the joy of Christmas.

I am grateful to Pedro Rios, director of the American Friends Service Committee’s U.S./Mexico Border Program, for his guidance. If you're interested in supporting La Posada Sin Fronteras or participating in the event, you may find out more here. I'm planning on being there.

TALKING WITH KIDS AFTER READING

Questions to talk about after hearing this story:
Resources for adults to help discuss these questions: