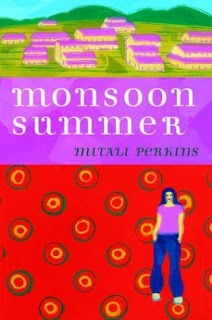 This realistic and romantic novel unobtrusively incorporates details of Indian life and culture. Jazz is a believable character, curious about her new surroundings but most engaged by her own family and friendship issues. She is appropriately upset by the poverty that surrounds her and increasingly aware of the Indians' different perceptions, including subtle indications of race and caste. Readers with an interest in faraway places will enjoy this story of friendship and first love. — Kathleen Isaacs, School Library Journal

When it comes to stories about the Indo-American experience, Mitali Perkins' Monsoon Summer is something of a reverse commute. Perkins offers a clear-eyed look back at the India in which she grew up. Her family wound up in Martinez, and she was educated at the University of California-Berkeley and Stanford. Bay Area kids will relish her descriptions of Telegraph Avenue in Berkeley, but it is her character's experiences in her mother's homeland that are so riveting. Perkins' character sees gut-wrenching poverty and prejudice, along with the cacophony of crowded cities and the beauty of her mother's native culture. — Kim Boatman, San Jose Mercury News

Place may influence people, but it is the people who define the place. Spirit tops geography, culture surpasses architecture. Circumstance may dictate our day-to-day life, but the heart is what the heart is. These are the messages Perkins imparts in her newest book, Monsoon Summer, a story written for her favorite people — teenagers. — Joan Morris, Contra Costa Times

With summer rapidly rolling to a close and the school year about to get underway, now's a good time to sneak in a few fun reads before you're bogged down with assignments … One way to stretch out the summer is to take a trip. Well, a literary one. Mitali Perkins takes you on a journey to India … Readers learn a lot about the culture and conditions of everyday life in India without taking a formal course on the subject. Perkins, a native of India, skillfully weaves the lessons into the story so it doesn't feel like classwork. — Cassandra Spratling, Detroit Free Press

Spending the summer in India with her family, fifteen-year-old Berkeley resident Jasmine finds the monsoon season — when people's "personalities change, and they do things they normally never would do" — working its magic on her. Half-black, half-Indian, Jazz sees herself (unfavorably) as "Amazon woman," the complete opposite of her petite, do-gooder mom, but in India Jazz starts helping others, and her distorted self-image gets an overhaul ... Her decision to help an Indian friend — an orphan with siblings to support — start her own business (is convincing). Also believable is Jazz's gradual realization, expressed through her funny and honest first-person narration, that not only is she tall and athletic, she's also beautiful and a natural people-helper like her mom. As a result of all this newfound confidence, Jazz confesses her feelings to Steve, her long-time best friend and the unrequited love of her life-providing readers with a satisfying (if predictable) romance to boot. — Horn Book

How (their) romance develops even over such a long distance is a major aspect of the story, and an appealing one for YA readers. But the strength of the novel is the detailed life in India during the months the family is there." — Clare Rosser, KLIATT

"(Perkins) enlightens readers not familiar with the richness of Indian culture. In Bollywood fashion, she turns turmoil into happy endings. — Kirkus

Of Note ... Jasmine Gardner is in entrepreneur heaven with her "Biz" snapping photos of tourists in Berkeley peacenik garb until her mother takes the family to India. In Monsoon Summer, Calcutta-born Stanford grad Mitali Perkins tells the story of a biracial California girl pulled from her roots only to find more in the orphanage where her mother grew up. — Leigh Fenley, San Diego Union-Tribune

Somebody, please make a movie out of Mitali Perkins' multicultural jewel of a novel—it's so much fun ... (She) handles a big cast of characters with the aplomb of a Bollywood director; still, she keeps her narrator, Jasmine, first and foremost. Perkins' central question, "Can people change?" is answered with humor, vivid descriptions, and a real knack for a good story. The author does not shy away from presenting problems, but readers looking for an alternative to the more graphic teen fare will be happy. I'd recommend Monsoon Summer to advanced preteen readers and grown-ups, too. — Susan T., Chicken Spaghetti

Mitali Perkins’ enjoyable depiction of a mixed-race family from Berkeley, California is a deftly told story, written with a lightness of touch and vividly capturing the atmosphere and character of the Indian rainy season ... That a tall, well-built, solid girl—who dreams of throwing the shot putt at the state level—is portrayed as glowingly attractive and a smart businesswoman to boot marks a refreshing change from the usual narrow definitions of American beauty. — Richard Vernon, Sojourners Magazine

Oh, how I adored this book. It is a lovely story of friendship, first loves, taking chances, faraway places, and for 15-year-old Jazz, discovering who she really is. And yet, this book is so much more than that. Jazz’s family spends a summer in Pune, India, where we and she get the chance to learn about the culture of India and about the subtle ways in which race and caste are a part of their lives. We meet Danita, an orphan girl who works for Jazz’s family. Not only does she know how to make a perfect cup of tea, she knows how to make Jazz see herself for who she is. The two girls become friends and teach each other to take chances and to be proud of who they are.— Sandi Pederson, Chicago Parent

I started out reading Monsoon Summer as a favor ... By the time I turned the last page, it was one of my favorite books on the shelf. I guess you could say I got monsoon madness! You might get it too as you read this treasure of a book. — reviewed in Presbyterians Today by Andrea Pauw, 8th grader, Louisville KY

... Jazz is an unforgettable protagonist ...The wry humor with which (she) narrates Monsoon Summer makes it an easy read, though the novel fairly brims with big lessons about life. The devotion these family members feel toward one another and the kindness they show one another are both believable and inspiring." — Josephine Bridges, Asian Reporter

... This is a book for readers who want to know more, who yearn to know more. It is adventure reading for smart romantics, and Jazz is a jewel of a heroine. — Colleen Mondor, Eclectica.org

... A touching story which deals with issues important to young girls such as self esteem and the quest for identity. It also deals with more general themes like culture, honesty, conquering one's fears, and selflessness. — Kidzworld.com

... Perkins does a great job changing Jazz by building her confidence through Danita. At first Jazz is a person who looks at the half-filled glass as half-empty. However, by the end of the book she has completely changed ... Keep your eyes peeled for Monsoon Summer — it's one whirlwind of a read! — Vidya Ravilochan, teen reviewer, Colorado Kids, Denver Post

... A great work of fiction that takes place mostly in present day Pune, India. Despite her best efforts to remain an introvert, Jasmine starts meeting new people and learning from them how to come out of her shell. This is a very realistic book. The author's use of language makes you feel like you are in a new place. It's a particularly good book for anyone who wants to improve their self-esteem and be less self-conscious about their appearance. — Mayling Ng, Teen Reporter, MassLive

Jazz is an overwhelmingly likable and understandable teen; the real treat here is that the reader realizes it long before she herself does, and it is wholly satisfying to watch her develop the awareness that she has a great deal to offer. The story provides an intriguing demonstration of the concept of getting through giving ... Offer this to fans of Brashares’ Traveling Pants books for a similarly enjoyable take on unexpected summer adventures. — Bulletin

Perkins folds interesting questions about caste discrimination, charity, and the challenges of growing up with a heroic parent into her warm, romantic story, which shows how the deepest private discoveries often come from very public risks. — ALA Booklist

Self-acceptance anchors the core of nearly every teenage story, movie and song, but it's a delight to find a book for teens that also involves accepting a multicultural, Indian background and handles this complex issue with genuine depth and insight ... Initially repulsed by the poverty and customs, Jazz warms up to the culture and the people of India and the realization that India is a source of richness in her life and the life of her family. The character of Jazz is intelligent, endearingly self-disparaging and very believable. Monsoon Summer provides a wonderful introduction to Indian culture ... You can almost taste the soothing creamy flavor of Indian tea after reading Perkins' description. — John Aeby, Hi Families, Holt International

Based on the advertising aimed at young teens, you could assume that only toothless, insipid products are available or wanted. Luckily, a number of writers are willing to accommodate the depth of the 12-and-older crowd ... In California, 15-year-old Jasmine Gardner runs a business selling mementos with a friend. But when Jazz is told she has to join her family for a trip to India, she balks at the risks involved. Eventually Mitali Perkins' Monsoon Summer (Delacorte) finds Jazz nurturing the commercial endeavors of others. — Teacher Magazine

One of the best YA books I have read in a long time. — Chris Coble, Middle School Book Club, Denver Public School Librarians

Throughout this heartfelt story, India's rainy season and myths of "monsoon madness" ("Some people go crazy with joy when the rains come. Others go mad because they can't handle the constant downpour," explains the director of the orphanage) become metaphors for Jazz's internal changes as she gradually and somewhat reluctantly assimilates to Indian culture. Danita, a 15-year-old orphan hired as the Gardners' cook, teaches Jazz to look at herself from a new perspective, convincing the tall, self-conscious teen that she is beautiful and worthy of seemingly out-of-reach Steve. In return, Jazz assists Danita in evading an undesirable arranged marriage, helping her start her own business. Besides having educational merit in conveying India's culture and its problems, Perkins' (The Sunita Experiment) novel sensitively traces an American girl's emotional growth. Readers will not be surprised when, in the end, Jazz wins greater self-respect along with Steve's heart. — Publishers Weekly

The adoption theme, even one generation removed from the protagonist, might well resonate with the American families who adopt from overseas. Jazz's voice is sassy and likeable. Mature at times for her age, with business-savvy to boot, she leads the reader through cluttered city streets and the cloistered setting of the orphanage, to a final resolution afforded by her own generous gesture. — Uma Krishnaswami, Children's Literature

A number of new leisure read choices will attract teens year-round with notable plots and unpredictable moments ... Mitali Perkins' Monsoon Summer tells of California-born Jasmine, who heads to India during the monsoon season on a family trip. Visiting her mother's native country isn't Jasmine's idea of a great summer vacation, especially since it revolves around her mother's volunteer work but her growing relationship with an Indian girl changes both her life and her self-centered focus. — Midwest Book Review