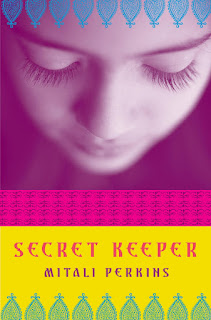 Shortlisted for the Massachusetts Book Award in the Young Adult category.

An IRA Notable Book for a Global Society.

If I had to use just one word to describe Secret Keeper, it'd be "unputdownable"; the other time I locked myself into a bathroom so I wouldn't be disturbed while reading, I was thirteen and clutching a Sidney Sheldon between damp palms. Perkins, an award-winning YA writer, knows how to construct characters so real you can see them breathe and laugh and cry and fight. She hurls you right into their lives, and you come up for air only when you turn the last page, and then only just, for this book has an ending that few YA novels match for heart-stopping poignancy (or Bollywood-style drama). Weeks after reading, I'm still thinking about the characters, wondering where they ended up five years hence. In fact, Perkins, I'll do your dishes and your laundry all of next year if you'll promise to write a sequel to Secret Keeper. Yes, I've got it baaaad ... Secret Keeper is excellent story-telling, and the fact that it's YA won't stop you passing this book on to your mom—or your grandmom, for that matter. — Eclectica Magazine

Well-developed characters, funny dialogue, and the authentic depiction of spunky Asha’s longing for romance and female self-determination, set in a culture that restrains women’s choices, make this book an attractive pick for teenage girls. In the end, a surprising sacrifice by Asha demonstrates her emotional maturity and her love for her sister. — School Library Journal

Set in India in the mid-1970s, this latest novel from Perkins is told from the perspective of Asha, a smart, impulsive girl who pours her heart into the pages of her diaries, which she names S.K., or "Secret Keeper." ... The characters are skillfully drafted, playing the requisite parts (domineering matriarch, displaced wife, gangly teenager) without becoming caricatures, and the setting is richly depicted ... Offer this to fans of family drama as well as those who seek literary windows into other cultural or historical contexts. — Bulletin

Full of thoughtful, complex characters and details about life for Bengali families in 1974 India, this bittersweet book paints a picture of a strong personality forced by adverse circumstances to hide her light and make painful choices to help her family. — Suzi Steffen, Eugene Weekly

In an intimate and absorbing drama about a displaced Indian family in the 1970s, Perkins (Monsoon Summer) vividly highlights the conflict between traditional Indian values and feminist ideals. After Asha’s father goes to America in search of a new job, the rest of the family moves from Delhi to Calcutta to live in the more restrictive household headed by her grandmother. As often as she can, Asha escapes to the rooftop to confide her woes to her “secret keeper,” a diary; breaking the rules of the house, she also befriends the son of the family next door, who gazes at her through a window. But their relationship changes irrevocably when tragedy prompts Asha to make a painful sacrifice for the sake of her mother and sister. Readers may not always agree with Asha’s bold decisions, but they will admire her courage and selflessness as she puts her family’s needs before her own. Besides offering insight into Indian culture, Perkins offers a moving portrait of a rebellious teen who relies on ingenuity rather than charm to prove her worth. — Publisher's Weekly

Arranged marriages and the role of women are at the core of this novel set in Calcutta, India, in 1974 and told from the viewpoint of Asha Gupta, 16. With her father seeking work in America, Asha, together with her gorgeous older sister, Reet, and their depressed mother, must move in with relatives, who are not at all welcoming. Unlike Reet, Asha is dismissed as “dark, skinny, flatchested,” with little chance of snaring a good husband, which is all a “good” Bengali girl should do. She keeps quiet about her college dreams except with the boy next door, who paints her portrait when they meet secretly. But as things get worse at home, she must rescue Reet from a horrific arranged marriage. Born in India and raised in the U.S., Perkins knows the traditions; in fact, there is sometimes too much cultural detail. But the plot is full of surprising secrets rooted in the characters’ conflicts and deep connections with each other. The two sisters and their mutual sacrifices are both heartbreaking and hopeful. — Booklist

Asha would rather be burning bras, studying psychology and playing tennis like Chris Evert (she’s that good). Instead, the 16-year-old, her older sister and her mother are leaving Delhi and heading to her uncle’s house in Calcutta , where they will stay while her engineer father searches for work in New York . Only Asha’s diary, S.K. (Secret Keeper) 1974, and Jay, a young painter next door, know her true feelings when an unexpected tragedy strikes, leaving her at the mercy of a strapped uncle, her mother’s depression and rigid gender expectations. Perkins weaves descriptions of Indian food, clothing, government and customs into Asha’s quest for freedom. Although some references are forced, together they help explain the teen’s startling choices and the price she and her family must pay for a better life in this achingly realistic story. An author’s note adds more details about the time and the changes (e.g., women in the workplace) that have occurred in India since then. Asha’s struggles will enlighten and inspire young women, and encourage them to value their own freedom. — Kirkus

Such a powerful story! ... Secret Keeper is a tale of love and loss, of traditional family and of new ways and mores creeping into and disrupting the old conventions. It’s a story that bridges cultures and creates understanding and makes even WASPs like me feel a twinge of identification with the characters and their very human situations ... Girls, especially those who are trying to balance responsibilities to family and to themselves, will find Asha to be a sympathetic character and a role model ... I really think that this book is Ms. Perkins’ best book to date, an exploration of cultural norms and changing roles, of responsibility to self and to family, and of flawed but loving answers to difficult issues. I highly recommend Secret Keeper. — Sherry Early, Semicolon

...This was a beautiful book. (Haven’t I said that already?) But it really was. The family dynamics, with the father gone to America, the mother and two sisters left to live with relatives. The money problems, the Indian culture, it was all so beautifully written and described. However, it was not a romance novel where everyone lives happily every after in their perfect world. It was a novel of family honor and respect, doing what is right even though it may kill you inside. It was beautiful and worth it, but have tissues ready at the end!" — Book Embargo

...Secret Keeper is filled with funny lines that jump out of the text (really, would the Grimms care if someone Indianized their tales?) and very nearly tear-inducing at the end -- which did not turn out the way I expected. And I'll admit it, I came away just a little bit in love with Asha's cousin Raj. If he gets to come back in a future book, I certainly won't complain. — Sarah Rettger, Archimedes Forgets

Mitali Perkins has a gift for creating three-dimensional characters, especially girls who aren't perfect, but who want to do the right thing. She also has a gift for making both settings and interpersonal dynamics feel real. She does all of these things brilliantly in Secret Keeper ... I read it two quick sittings, eager to know what would happen next. I could practically smell and taste Calcutta in the 1970's, and I loved the characters, especially Asha. — Jen Robinson, JKR Books

The characters drew a hole in my heart from how life-like they were and how the ending wasn't exactly what I wanted. It was still amazing. If you want to discover a book that will pull your heart strings and make you wonder... How much would you sacrifice to save someone that you loved? — Sarah Woodard, Sarah's Random Musings

Asha, her older sister Reet, their mother, and the rest of their family, who take them in when Asha’s father leaves to find an engineering job in America, all leap off the pages. In most scenes, you can hear the music of Bengali accents, and the swishing of the cloth of brightly colored saris ... the book is compelling enough for adults to read as well as the younger readers being targeted. — Melissa A. Bartell, All Things Girl