You Bring the Distant Near

YOU BRING THE DISTANT NEAR (Macmillan FSG) received some exciting responses. Before it came out, EW picked it as one of the most anticipated young adult novels of the year. On release day, which is delightful enough, I heard that it was nominated for the National Book Award! It also won a Walter Honor Award, the Magnolia Award, and the South Asia Book Award! I'm thrilled, to say the least.

It's also one of the titles on the Best Fiction for Young Adults list and the Amelia Bloomer list of recommended feminist fiction literature, both curated by the American Library Association. Meanwhile, on the audiobook side, the beautifully-narrated version of the novel was an Audie Award finalist. Yay! Celebrate with me, friends.

Read an excerpt.
Download the discussion guide.
It's also available in a magnificent audio version, performed by five uber-talented actors.
Here I am reading the first chapter. 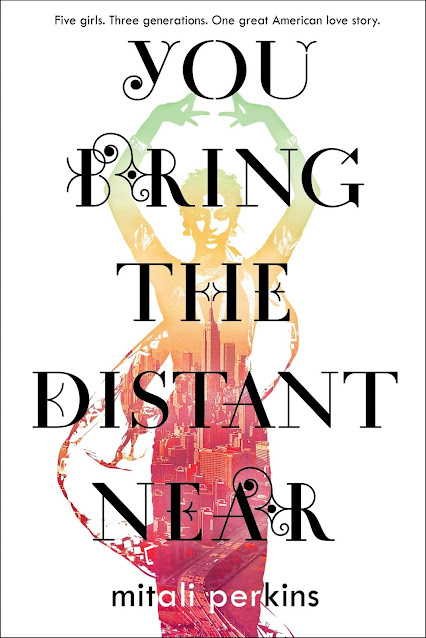 You Bring The Distant Near | Macmillan FSG | YA/Adult
★ "An unforgettable novel that spans decades and continents as it moves among three generations of Indian women, some new immigrants to the U.S., all struggling to bridge cultures ... Perkins’s vibrantly written exploration of a family in transition is saturated with romance, humor, and meaningful reflections on patriotism, blended cultures, and carving one’s own path. " — Publishers Weekly starred review
★ "Full of sisterhood, diversity, and complex, strong women, this book will speak to readers as they will undoubtedly find a kindred spirit in at least one of the Das women." — Booklist starred review

★ "An intricately woven examination of identity and culture and the ways these forces interact .... The characters are full of genuine warmth and affection for one another, even when they struggle to show it." — VOYA starred review


★ "An ambitious narrative that illuminates past and present, departure and reunion, women and family." — Horn Book starred review
★  "This stunning book about immigration and cultural assimilation is a must-purchase for teen and new adult collections." — School Library Journal starred review
★  "With wisdom and wit, You Bring the Distant Near illustrates the beauty in diversity. Perkins's striking imagery and deep, heartfelt insights illuminate the darkest corners of ignorance, providing a bright path to understanding and embracing differences in all their many splendors." — Shelf Awareness starred review


"This touching, intricately layered novel follows an Indian American family who immigrated to the United States in the 1970s as it adjusts to life here and faces both opportunities and struggles over time ... Accomplished storytelling, vividly drawn characters and details that capture the changing American zeitgeist broaden this vibrant book’s appeal beyond its target audience. Readers across the generations will take it to their hearts." — Washington Post

"The fully fleshed characters and complex family dynamics provide a vibrant background for exploration of multigenerational adaptation to a diverse America and of the familial and romantic love that nourishes their new roots." — Bulletin for the Center of Children's Books


"Perkins tells a nuanced, quintessentially American story. She affectionately traces four young women’s interrelated yet distinct paths to determining their identities, and, later in the book, adds a fifth. Ranee, the Das family matriarch, has long lived according to Bengali tradition. In her 60s, she embarks on a process of discovery familiar to many immigrants who move to this country as adults: She reshapes herself from the blended clay of her native and adopted homes." — Chicago Tribune

"This ambitious multigenerational story of finding identity and acceptance is inspired by the author’s own experience as the youngest of three sisters who arrived in the United States in the 1970s. The exquisite narrative journeys across time and geography — from Ghana to London to Harlem — and crosses borders of love, faith, and culture."— Teen Vogue
"Features inspiring South Asian girl and women protagonists grappling with love, faith, and culture, as well as the intersections among their personal, communal, and national histories ... lushly drawn and emotionally resonant. ― Kirkus
Here's a brief Meet-the-Author clip I recorded for Teaching Books about the title of the book.

And here I am reading the first chapter.

You Bring the Distant Near | Songs for the Novel