Home Is In Between 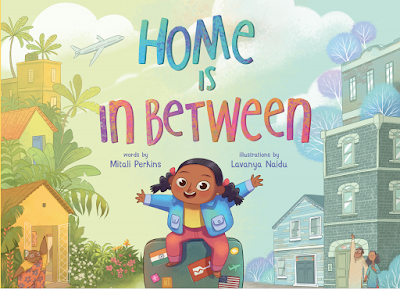 Home Is In Between
Picture Book | Macmillan FSG | Coming 2/23/21
PRE-ORDER IT!
A Junior Library Guild Selection

My parents were from the villages of Bengal. They brought me to the United States when I was seven and raised me in a town where we were one of a few families from other countries. I worked hard to understand “American” manners, slang, trends, and rituals—the “code” at school. At the same time, I was trying to stay fluent in traditional Bengali culture and language—the “code” of home. Going back and forth was tiring, and I often felt as if I didn’t belong in either world. But once I grew up, I realized that switching between two codes as a child had been a gift. It’s like learning a new language—kids are faster and better at it than grown-ups. And if we work at it as kids, we keep some ability to crack cultural codes for the rest of our lives. “It’s like a superpower,” I tell young immigrants. The space between cultures doesn’t have to be a barrier; for children who grow up there, it can become a threshold of gratitude to celebrate the best of many worlds. I hope readers make themselves at home in Shanti’s story. Her name in Bangla means “peace.”

Notes on the Design

Some parts of the book are designed so Shanti travels back and forth across the gutter of a two-page spread. To the left are scenes from her apartment, where things are still a lot like the Bengali village of her parents’ childhood, and to the right are scenes in the American town where Shanti is growing up.

Illustrator Lavanya Naidu, who also has has roots in Bengal, created the village scenes in hues of orange, green, and white to hint at the colors of the Indian flag, and depicted the American scenes in blues, purples (blue + red), and pinks (red + white).

My favorite scene comes at the end, when a larger-than-life Shanti, still in the gutter of the book but now clearly in charge of it, celebrates her ability to traverse both worlds fluently.